The lure of lager 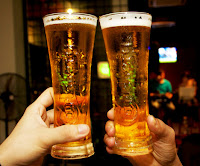 There’s nothing to beat a cool, clear, fresh pint of cask beer, bursting with flavour and condition. Unfortunately a substantial minority fail to come anywhere close to that description. More than once, I’ve sat there nursing a pint of warm, flat, vaguely murky liquid and thought to myself “with the benefit of hindsight, wouldn’t I have been better off with a pint of Carling?”

In general, in my regular drinking, I tend to stick to places where I expect to get a decent pint of cask, and so such occasions are pretty rare, although they do happen. The few occurrences I can think of in recent years where I’ve drunk lager on licensed premises have been in restaurants or hotel bars.

However, a couple of years ago I had a week’s holiday touring Scotland, as described here. The main objective was sightseeing, not drinking, and very often I would find myself at lunchtime in establishments with no cask beer just looking for something to wash down my food. So I usually ended up with a pint of standard lager. In my limited experience, I’d say Carling was the least bad of the “big three” – Fosters being very sweet and Carlsberg having a rather grainy flavour. The problem is, though, that while the first few gulps may be cool and refreshing, by the time you get to the bottom of the glass you’ve lost interest. They’re all just fundamentally dull and bland. On one occasion I had nitrokeg Younger’s Tartan Special or suchlike which to my palate was considerably worse than cooking lager.

I also, oddly enough, recently ended up with a pint of Carlsberg in a local Spoons. It was in the middle of their beer festival, and on this occasion all the guest beers that could be ordered as part of the meal deal were some way over 5% which, as I was driving, would not have been a good idea. They had even replaced Ruddles with a festival beer, and Abbot isn’t included in the offer. So I had a Carlsberg in preference to a John Smith’s Extra Smooth. As before, initially refreshing, ultimately dull, with an odd kind of cereal note to it. If it was the only draught beer in the world I might drink more of it, but fortunately in general I don’t have to.

It’s not really surprising, though, that many beer drinkers steer clear of the quality lottery that cask beer can be and choose to stick to something that, while it may not excite, reliably does the job and is unlikely to disappoint. The question must also be asked whether, even though it is often derided, standard lager is actually in any sense a worse product than Coke or Pepsi.