A tonic for the neds 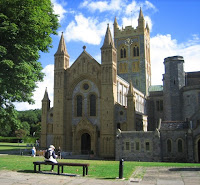 Being recently in the area, I thought I would pay a visit to Buckfast Abbey in Devon, home of the notorious Buckfast Tonic Wine. The abbey was founded in the late 19th century by Benedictine monks fleeing religious persecution in France, and now boasts an impressive church and a variety of other buildings and gardens spread across an extensive site. To be honest, I wouldn’t really recommend it as a tourist attraction, as it seems to cater primarily for coachloads of pensioners from Paignton and Torquay, but as it’s free it had to be worth a quick look.

I took the opportunity to purchase a small bottle of the wine, purely for research purposes, of course. The selling price in the abbey shop was £4.10 for a 35cl bottle, and £7.40 for a 70cl, so at 15% ABV even the bigger bottle is 70p per unit and thus hardly a cheap drink.

It pours a very dark, opaque brown with a slight reddish tinge, like an old ruby port. I had always imagined that it would have a medicinal, “cough mixture” taste, but in fact it’s just overpoweringly sweet, like red wine that has had a load of sugar and a bit of vanilla chucked in to it. To be honest, while I can understand the appeal of sweet cream sherry, this isn’t remotely pleasant. But if you don’t try it, you’ll never know what it’s like.

The main appeal, of course, is not that it’s cheap or nice-tasting, but that it has a very high caffeine content. This is what has made it an essential part of the Saturday night experience for Scottish neds looking for a buzz, somewhat ironic as its original intention was as a pick-me-up for old biddies. The manufacturers are careful to state on the label “High caffeine content” and point out that “the name ‘Tonic wine’ does not imply any health giving or medicinal properties”.

So notorious has it become that one Scottish MSP even proposed to ban all alcoholic drinks containing caffeine although, as the author of the article I linked to above is surely correct to say, “If Scots have a problem with Buckfast Tonic Wine, it is reasonable to conclude that the solution lies not in Buckfast but in Scotland.”

The abbey also has a gift shop selling various kinds of monastic produce from around the world, including beers from Chimay in Belgium and Andechs in Bavaria, albeit at very steep tourist prices.