Still not going away 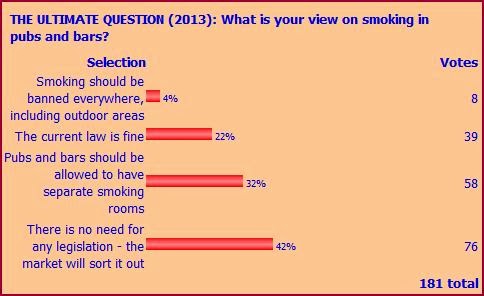 For three successive years I have run a poll asking the same question about people’s view of the smoking ban in pubs and bars. Last year’s results are here, and the latest are shown at the right, with the three-year summary below.

As you can see, there has been a decline from 80% to 74% in the overall proportion supporting some relaxation of the current law, but also a decline in those advocating more extreme measures which would surely be extremely damaging to pubs.

And the fact that nearly three-quarters of respondents do support some degree of relaxation underlines the fact that this issue is not going away any day soon. The smoking ban has ripped the guts out of the British pub trade and created an abiding legacy of bitterness amongst pubgoers, smokers and non-smokers alike. Those supporting complete deregulation remain the biggest single group by some margin.

And it certainly gives the lie to the risible claim from one commenter on here that there has been “a huge groundswell of support for the smoking ban”, something he signally failed to back up with any facts. Indeed, until recently, the annual British Social Attitudes Survey had never shown majority support for the current blanket ban. I’m not sure whether the question is still asked.

If the antismokers are so confident of overwhelming support, why aren’t they willing to allow smoking and non-smoking pubs and let the market decide?