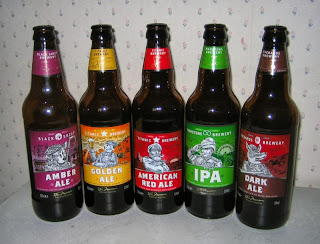 Although they sell large quantities of generic own-brand canned lagers and bitters, the major supermarkets have always struggled to make an impact with own-label products at the more premium end of the beer market. However, Morrison’s have now made a major investment in the category with the launch of a range of five new British premium bottled ales, all of which declare the brewery of origin.

These are as follows:

The American Red is undoubtedly the pick of the bunch, a robust, full-flavoured beer with a strong malt underpinning but avoiding any sense of sweetness and with a distinct hop overlay. The Dark Ale, which is more of a ruby ale than a black one in the style of Old Peculier, is surprisingly good too. The Golden Ale is pleasant enough in a soft, easy-drinking style, the Titanic version being better than the Black Sheep. The IPA is a bit underwhelming given its strength and claims of hoppiness, while the Amber Ale, while not a bad beer as such, has that slight muddiness of flavour characteristic of Black Sheep products.

Nevertheless, all are creditable additions to the PBA category and none are attempting to be obvious clones of something else as you often find with own-label products. Pricing may be an issue, though. Currently all are on offer at an introductory £1.50 per bottle, but the official sticker price is £1.79, which doesn’t look too good when Morrison’s will sell you three bottles from their extensive standard branded PBA range for £4.50.

There’s also always a nagging doubt with own-branded beers that you are basically drinking something brewed to a specification rather than an authentic product with its own distinctive character. It may be entirely psychological, but it’s hard to avoid the thought that these beers might be better perceived if sold under the breweries’ own labels.