Too much eye of newt? 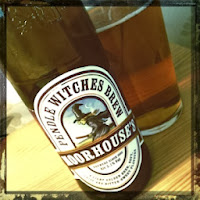 Pendle Witches Brew, from Moorhouse’s in Burnley, was one of the flagship beers of the early microbrewery revolution. Weighing in at a powerful 5.1% ABV, it was a dangerously drinkable strong pale ale of a type not seen before in Britain. Perhaps the beer closest in general style was Hall & Woodhouse Tanglefoot.

It’s not an especially hoppy beer in the modern IPA style, instead being relatively light-bodied with a balance of malt and hop, a slight honey note and a noticeable alcohol kick. It doesn’t tend to be stocked in the supermarkets I regularly visit but I often like to pick up a bottle when I do see it. So I was pleased to see in appearing at a very reasonable £1.50 a bottle as part of Morrison’s recent Halloween promotion.

However, the first bottle I had threw a distinct haze and didn’t taste quite right either. Thinking it might just be an unusual susceptibility to fridge chill, I just kept the second in a cool cupboard, but that was hazy too. Matthew Lawrenson of Seeing the Lizards fame has reported similar problems on Twitter.

So I sent a complaint off to Moorhouse’s and, to their credit, they sent me a tray of eight bottles. These had a later best before date and were just as good as I would have expected them to be. So, a beer well worth a try if you see it, but avoid bottles with a Best Before of July 2014.