What time is time? 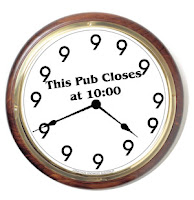 The 2003 Licensing Act gave pubs a welcome flexibility as to when they stopped serving at the end of the evening. However, it has led to a lack of clarity over when they do actually shut up shop which was never a problem in the days when the vast majority had to put the towels over the pumps promptly at 11 pm.

In your local pub, this won’t be an issue, because you’ll be familiar with their pattern of hours. However, if you’ve been out for the evening and end up in a relatively unfamiliar pub at 10.30, it leads to something of a dilemma. Do they shut at 11, as many pubs still do, or are they going to keep serving longer? So do you stay there, or move on to somewhere else that you know will stay open until midnight?

Add to this the fact that many pubs, while they may continue serving after 11, close their doors so they don’t attract late-night drunks turfed out of other pubs, and so you have to make your decision about where to end up before the traditional closing time. And some pubs, while they may have a licence to serve until midnight, will often actually call time before that if the trade is sparse.

Of course you can always ask the bar staff when they plan to stop serving, but that might not be so easy if the pub is busy and, in any case, surely the pub should make it obvious without expecting people to ask. So might it not be a good idea for pubs to display clearly, possibly by a little clock face mounted above the bar, when they are actually going to shut up shop, so that customers know exactly where they stand?