Breaking out of the bubble 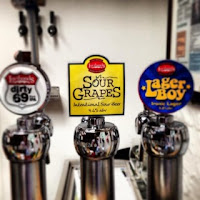 There can’t be anything about which so much has been written in the beer blogosphere as “craft keg”, and yet which has made so little impact on the mainstream of the pub trade.

Don’t get me wrong, I’m not one of those “all keg is piss” merchants and, as I’ve written here, I can see a role for craft keg in allowing specialist, low-volume beers to be served on draught, and to get some interesting non-mainstream beer into places such as restaurants and music venues that don’t have the facilities or the regular turnover to stock cask.

It has become a common sight in specialist beer bars within the urban beer bubble, and indeed BrewDog’s bars serve nothing else. But, despite the claims of some of its advocates, I simply don’t see how it is going to break out of that bubble and go mainstream in the same way that cask beer has. Any self-respecting pub now has cask, but will the same ever be true of craft keg?

No doubt someone will pipe up that it’s all over the place in London. That may be true – I don’t live in London and never go there, so I can’t really comment. But, in beer terms, as in many other fields, London increasingly marches to the beat of a different drum from the rest of the country, and even there I’d be surprised if it’s anything like ubiquitous in the dining pubs and suburban locals of the outer boroughs.

But, in the generality of pubs, you just don’t see it at all. There’s the odd craft keg tap in one or two beer-focused pubs in Stockport, but in most of the pubs I go in – family brewer tied pubs, pub company pubs, free houses – it’s conspicuous by its absence. I’ve recent been on holiday in the South-West and called in around 15 pubs of various types that either I have never visited before or not done so for a number of years. Plenty of good cask beer, but I can’t recall seeing a single craft keg tap between them.

If it is to make that breakthrough, craft keg needs a distinctive, easily recognisable champion brand, and the obvious one is BrewDog Punk IPA. Last year, I asked whether we’d see Wetherspoons stocking a craft keg beer before the end of 2013. The general verdict was that they probably would, but there’s no sign of it yet, and it looks less likely now than it did a year ago. And, if that did happen, such that we saw a distinctive craft keg ale in thousands of pubs nationwide, no doubt many of the current champions of the style would disown it.

Another problem is that most craft keg beers seem to be in the 5% ABV plus strength band, while in general there has been a distinct move away from stronger beers in the on-trade. Matthew Lawrenson asks here why we never see craft keg session bitter. While it’s perfectly possible to make a craft keg beer of modest strength, and some brewers do, what does that actually offer over a cask beer? Would it not just be a revival of “old keg”, albeit made by a man with an ironic beard in a railway arch? The argument about whether cask or keg is better for everyday supping beers has long since been won by cask.

If this huge breakout from the bubble does happen, it will be very interesting, and it will certainly pose a challenge to many of the CAMRA diehards. But I just don’t think it will.