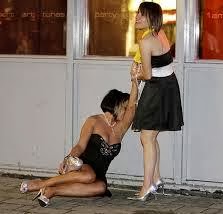 A phrase you often near nowadays in relation to pubs is that they represent a “controlled drinking environment”. The implication is that the restraint imposed by the presence of the licensee and other customers leads people to drink in a more responsible manner than they would if they had bought a load of booze from Tesco and were drinking it at home.

This is a concept that has only really appeared in the past fifteen or so years. Back in the 1970s, when pubs accommodated the vast majority of drinking, whether responsible or irresponsible, such an idea would have been unheard of, except perhaps to distinguish well-run pubs from poorly-run ones. It’s only in recent years when on-trade consumption has been clearly losing ground to the off-trade that it’s become popularised as an attempt to distinguish the two.

The idea has some validity in the context of socialising young people into drinking in a restrained and moderate way. They’re much more likely to do that in pubs under the watchful eye of the licensee and older customers than experimenting on their own on a park bench. But, as a concept applied to general adult drinking, it’s basically special pleading that bears little relation to reality.

People drinking in pubs are likely to consume considerably more per session than those doing it at home, and are also more likely to be involved in drink-related disorder, whether as victims or perpetrators, and also to be the innocent victims of traffic accidents. For many people, a weekly pub night is an opportunity to cut loose a bit, whereas at home even if they drank anything it would just be a glass of wine or a single bottle or can of beer.

Even in the best-run community pub (and how many of those are left?) you will find customers towards the end of Friday or Saturday night very much the worse for wear, if not actually drunk, and certainly guilty of binge-drinking as defined by the anti-drink lobby. You won’t be told that you’ve had enough until you’re staggering and slurring your words. If you’re in there every night you’ll be a loyal customer, not someone with a drink problem.

The alcohol-fuelled disorder that we see in some of our larger towns and cities is often laid at the door of “pre-loading” on cheap off-trade spirits before going out on the town. However, it seems somewhat perverse to blame the state people end up in on the first drink they had rather than the last, and people wouldn’t be pre-loading in the first place if the intention wasn’t to go out afterwards. If you’ve just been drinking at home or at a private party all evening you’re more likely to end up passed out on the sofa than throwing up in the middle of the High Street at 3 am. And someone in the on-trade has sold them that last drink that has put them in that state.

The point is also made that most of the people referred to hospitals with chronic alcoholism have been mainly drinking alcohol bought in the off-trade. No doubt that’s true, not least because it’s much cheaper, but it doesn’t mean cracking open a bottle of wine with Sunday lunch or a beer in front of the telly when watching Midsomer Murders is automatically going to set you on the road to rack and ruin. Going back a generation, many alcoholics were predominantly pub drinkers and, even now, there are a surprising number of people who are mainly drinking in pubs and clubs, but where the regularity and scale of their consumption must put them in the problem category. In fact a common pattern of alcoholism is people who give the appearance of engaging in enthusiastic but not abnormal social drinking in pubs but then secretly top it up at other times.

You sometimes hear anti-drink campaigners like Don Shenker and Sir Ian Gilmore praising the role of pubs and expressing regret that they have been allowed to decline. But this really comes across as breathtaking hypocrisy when over the years they have consistently opposed the liberalisation of licensing hours and supported every anti-pub measure and proposal such as the smoking ban, the duty escalator and cutting the drink-drive limit, not to mention encouraging a general anti-drink climate in society that has deterred responsible people from using pubs. They’re no more friends of pubs than the Faroe Islanders are friends of whales. They’re only expressing sympathy for pubs as a kind of divide-and-rule tactic because they can see they are on the slide. It wouldn’t surprise me if their equivalents of fifty years ago had been advocating a move to more at-home drinking with the family and with meals, as opposed to men boozing together in the pub, as a way of encouraging a more responsible approach.

Nobody who reads this blog could be left in any doubt that I see pubs as a valuable British tradition that has an important role to play in bringing people together and encouraging a sense of community, and at their best are havens of conviviality that bring pleasure to millions. It is very regrettable that, over the years, legislators and opinion-formers have done so much to undermine them. But to claim that, in comparison with at-home drinking, they have some kind of privileged moral status is frankly just silly and, in a wider context, distinctly unhelpful.

Over the years, for a variety of reasons, most of which fall under the category of “the tide of history”, there has been a marked shift away from on-trade drinking, and for most people their drinking is now a balance between the two depending on the context. Plenty of people probably never drink in a pub from one month to the next. The attitude of “we never have drink in the house” now comes across as distinctly old-fashioned. And it has to be pointed out that there’s a slight inconsistency in self-proclaimed beer lovers bewailing the plight of pubs while at the same time stocking up on obscure American and Belgian imported bottles from specialist off-licences.

To parrot the mantras of the anti-drink lobby about preloading on cheap vodka, the evils of white cider and drink being available at pocket-money prices does the wider cause of defending pubs, the brewing industry and responsible drinking no good. It is the mirror-image of the press hysteria about “binge-drink Britain” and weekend town-centre disorder. Each form of drinking can be done either responsibly or irresponsibly, and the vast majority of drinkers fall into the first category. Neither on- nor off-trade has a unique claim to the moral high ground.

If the anti-drink lobby is to be countered effectively it is essential to stop the pointless squabbling, accept that all forms of drinking have their positives and negatives, and present a united front. That is the lesson that needs to be learned from the successful campaign to scrap the beer duty escalator.