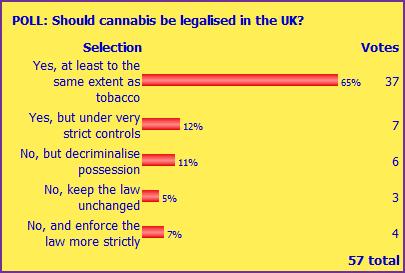 These are the results of my poll on cannabis legalisation, stemming from my earlier post. As you can see, there’s almost a two-thirds majority for complete legalisation. With some reservations, this is the option I voted for.

However, as discussed before, the various issues around the comparison with tobacco are a major stumbling block on the path to legalisation. Many in public health believe that the complete eradication of tobacco use is a desirable long-term objective. Would the same be true of cannabis?

As Cooking Lager said in the comments on the earlier post, the question of “passive intoxication” means it’s unlikely that cannabis use would ever be widely accepted in pubs and pub gardens. It would need to confined to dedicated clubs and cafés.

I’ve also suggested in the past that legalisation might not quite be the nirvana some people imagine, and for current users the status of it being illegal but widely tolerated may in fact be preferable. Legalisation, regulation and taxation could take all the fun out of it.

Posted by Curmudgeon at 5:23 pm