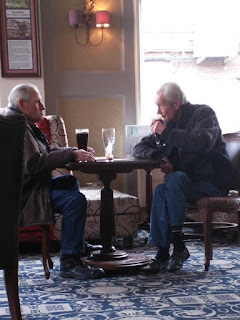 The Publican’s Morning Advertiser reports that older male customers visiting pubs, bars, cafes and restaurants still experience “covert or overt animosity” and are acutely aware of being unwelcome, according to new research.

Operators have been urged to rethink staff training, accessibility and physical design of their venues in a bid to appeal to older men, who make astronomical numbers of visits to the UK's hospitality industry each year. Making a special effort to focus on the experience of codgers, such as remembering their names, not calling them “mate”, speaking loudly and clearly, and providing beermats and doggy bags meant they were more likely to be loyal to a particular pub or restaurant.

Design features like kitchens well separated from the public areas, to keep food smells away, bench seating, and plain, wood-panelled walls with tasteful pictures also added to men’s overall experiences. Lack of disabled parking, slow service, toilets up or down flights of stairs, and venues that don't cater for mobility scooters topped the list of complaints..

Being made to feel unwelcome by other customers also emerged as a major issue. Many geezers in the study by Oxford Brookes University and the Oxford School of Hospitality said they were conscious of other customers' reactions to them and "hostile" behaviour like disapproving looks, children running around and shouting, and parents saying to them “keep away from the nasty man” meant they were unlikely to visit again and would tell friends not to go.

Several blokes said they avoided places that were too noisy, choosing to visit venues which were reasonably quiet, dark and had cosy corners for reading the paper. Loud dance music and uncomfortable seating at high stools came in for particular criticism. They were happy to see televised football matches, but thought more effort should be made to show Test cricket, golf and bowls tournaments. Outdoor smoking areas were generally felt to be lacking both in seating and shelter, and should be provided with patio heaters.

Big chains didn't perform well in the research, with the experience they offered older men described as "lacking" by one respondent, who said: “It’s all a bit slapdash, there's no care taken, it doesn't feel homely, it doesn't feel comfortable and doesn't feel friendly a lot of the time.”

Researchers interviewed 59 miserable old gits about their experiences eating and drinking out in a range of venues, including pubs. However, 24 of these told them to bugger off, so the results may not be fully representative.