Then they came for the Coke drinkers 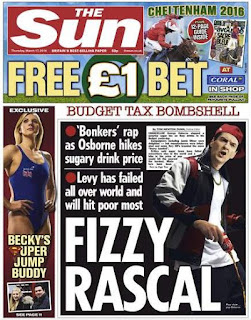 This week, George Osborne confounded many people’s expectations by introducing a new tax on sugary carbonated soft drinks in his Budget. Rather than imposing a specific charge per millilitre sold, it will take the form of a levy on producers based on the amount of sugar they use, thus making it less obvious to the buyer. But the end result will be the same – either higher prices or lower margins.

Needless to say, this was welcomed by egregious mockney food snob Jamie Oliver and various other lobbyists. But many commentators have expressed scepticism as to whether it will achieve its objective of cutting child obesity, and even that it might end up being counter-productive.

I can’t find an exact figure, but I recall reading that calorie intake from all soft drinks is only about 6% of the total, so even halving that will make little overall difference. And people may simply put up with it and continue drinking them. There’s plenty of evidence that tinkering with tax rates makes little difference to consumption patterns if they’re not going with the grain of what people want. Just look at all those 2.8% beers weighing down bars and supermarket shelves! Regular carbonated drinks already make up less than half of the total anyway.

Still drinks such as fruit juices and smoothies will not be affected , even though many of them contain more sugar than carbonated drinks. The Institute for Fiscal Studies has suggested that switching consumption to juice drinks may increase overall calorie consumption. And there have been numerous concerns expressed about the safety of artificial sweeteners such as aspartame. We were told for decades that margarine was better for you than butter, but the balance of opinion has now swung back towards the natural product.

I’d also say from observation that most parents give their young children still juice or juice-based drinks, not fizzy pop. Cans are something they graduate on to once they’re in a position to make their own choices.

There’s also a distinct whiff of snobbery about all this, as the Sun acknowledges on yesterday’s front page. Regular fizzy drinks are something consumed by dreadful oiks, rather than nice people like us who prefer fruit smoothies and pomegranate juice. It has echoes of Osborne’s omnishambles “pasty tax”. The financial impact will clearly weigh most heavily on the less well-off, but pointing this out has attracted patronising responses along the lines of “So? Water is free.” That’s true, and I’m sure it makes a good food pairing with gruel.

The worst aspect of all, though, is that it represents an unnecessary surrender to the public health lobby. Something must be done, they cry, and this is something, so let’s do it. Even if it doesn’t work, it still sends a message. And, having smelt blood in the water, you can be sure that they will be coming back for more. As Christopher Snowdon points out, it’s not going to stop there.

Posted by Curmudgeon at 2:31 pm