I was recently staying in Evesham and, feeling a bit peckish, popped out of my hotel to a nearby convenience store for a chocolate bar. It turned out this was a Polish shop, and I couldn’t help but notice the impressive array of different Polish beers, mostly at a bargain £1 for a 500ml can. So I emerged with these to do a bit of research: 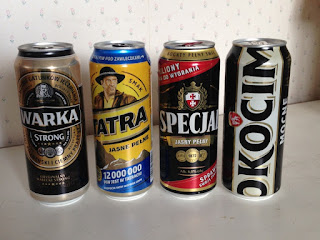 Poland is one of Europe’s major brewing nations, and its output often seems to be unfairly disregarded. There was a vogue in the UK for Polish beers maybe about eight years ago, with brews such as Lech, Tyskie and Zywiec becoming popular, but that seems to have faded now. I tried some, but concluded that they tended to be rather bland lagers whose main selling point was being, typically at 5.5%, a little stronger than the norm.

This particular shop must have had about forty different varieties, so it wasn’t easy to pick some at random. I tried to avoid both the ones I’d already heard of, and any that ventured into Special Brew territory. I’d never heard of any of the brand names apart from Okocim, although the one I bought was the stronger Mocne. Needless to say, despite the usual mischievous suggestions, I didn’t drink them all at one sitting and then crash out on the sofa. My conclusions are as follows:

Not the world’s greatest beers, maybe, but all palatable enough and, I would suggest, distinctly superior in quality to your typical British-brewed premium lager such as Stella. If you have a Polish shop near you, it may be worth popping in and seeing what they have available.

(The title, by the way, means “Beer from Polish shop”)

If Jamie Oliver got drunk on Polish lager, would he be a Mocne twat?

And, before someone else points it out, I know it’s a bit reminiscent of this: