A couple of weeks ago I attended a CAMRA revitalisation meeting at Wetherspoon’s Gateway in East Didsbury, which was described by Martin Taylor here. The four people standing at the rear include Cooking Lager (1), me (2) and Martin (4). Photo courtesy of Matt from When My Feet Go Through the Door. 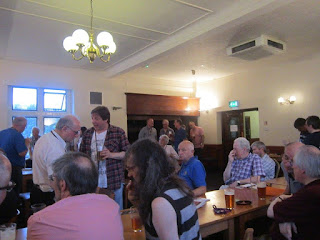 It was encouraging that the meeting felt that improving beer quality at the point of dispense needed to be a major priority for CAMRA, and that it accepted that social change, not evil pubcos and planners, was the major cause of the decline of pubs in recent years.

The picture gives a clear impression of the age profile of the attendees – of about 50 people there, only five admitted to being under 50, and I’d bet that, at 57, I was below the average. The ageing active membership is widely recognised as a problem for CAMRA, but it’s one they share with most other membership organisations.

It doesn’t necessarily follow, though, that diluting the organisation’s principles is going to bring in new, younger people, and the result might simply be to alienate the existing activists. Maybe this is not a comparison to take too far, but it has also been widely observed that, while religious observance is declining overall, the churches that do better are often those putting across a fundamentalist message rather than trimming to modern secular trends.

It was very noticeable that, within the attendees, there were two strongly conflicting points of view. On the one hand, some took the view that CAMRA really needed to get behind all these enthusiastic new brewers producing innovative, high-quality beers, even if they didn’t technically qualify as real ale. Others, though, felt that real ale remained under serious threat and no backsliding or compromise was acceptable.

I don’t really see that these standpoints can ever be fully reconciled. And, in fact, I’d say they are both wrong. Any formal endorsement of non-real beers would end up creating all kinds of thorny questions of definition and inviting accusations of beer snobbery. But the real ale purism all too easily slides into “fighting the keg menace” and a narrow-minded refusal to recognise merit in any forms of beer that aren’t “real”.

However, surely CAMRA should be able to regard the preservation and promotion of real ale, and the pub and brewery culture surrounding it, as its core campaigning purpose, while still being able to accept that there are many other high-quality beers around that do not qualify “real ale”. As founder member Michael Hardman famously said, it should be a campaign FOR something, not AGAINST something, and “real ale” should not be regarded as synonymous with “good beer”.

And the one thing that CAMRA should do is to drop the ludicrous fetishising of bottle-conditioned beers. They had effectively died out by the time it was formed and were irrelevant to what it was set up to champion. They are not the direct equivalent of cask-conditioned beers and should not be put forward as such.