Tell the kids that, and they’ll never believe you 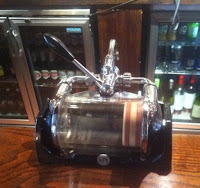 Back in January 2010, to welcome the new decade, I produced a list for my Opening Times column of features of the drinking scene of 1980 that were very different from today. This recently came up in conversation on Twitter, and Tandleman gave me a whole lot more to add: The practice of walking around a number of pubs is certainly something, once commonplace, that has largely died out. Perhaps that explains the high average age of the typical attendees on CAMRA Staggers.

Maybe pubs weren’t astonishingly busy most of the time, but being unable to find a seat was far more common, and they were often busy at times when they’re now closed.

The photo is of an electric diaphragm metered beer pump - something the kids probably wouldn’t believe ever existed.