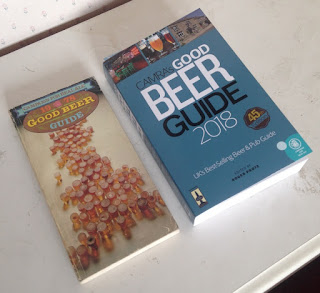 The 1978 edition, which came out six months after I turned eighteen, was the first Good Beer Guide I ever bought. It played a formative role in moulding my perceptions of the beer and pub landscape. After a while, I threw it away on the grounds that it was now “out of date”, a decision I later came to regret as it became a fascinating historical record and an insight into a past era of my life. So I recently acquired a copy via eBay, in impressively good condition. As they say, one man’s tat is another man’s treasure.

The cover picture, possibly the most memorable of any GBG, is a map of Great Britain made up of pints of beer, with the same on the back cover, only with beermats. It was the last guide to use the “blob” system for denoting beers, with a pale ring against a brewer’s name indicating bitter and a dark one mild. If a brewer produced more than one, there was a little number inside the blob that you needed to cross-reference to the brewery section at the back. It was also the last for many years to include a location map at the beginning of each county section – the 1979 edition switched to having a mini road atlas in the back with a little symbol against each town or village with a listed pub, which in my view was much harder to use.

It provides an interesting contrast with the 2018 edition, which dropped on to my doormat earlier this week. For a start, the latest one is much thicker – 1032 pages as opposed to 256. The brewery section has expanded from 14 to a staggering 289 pages, and that’s not including the index of beer names. On the other hand, the total number of pubs has fallen from around 5,500 to 4,500, the extra pages being accounted for by longer descriptions and a bigger typeface. The cover price has risen from £1.95 (which, according, to the Bank of England’s inflation calculator would be £10.27 in current prices) to £15.99.

Some of the descriptions are famously terse, such as “An old pub”, “A friendly local”, “An honest alehouse”, but others expand into a kind of poetry. For example, the Crown in Stockport is described as “Spotless museum piece with awesome view of the viaduct from the outside gents”, while of the Victoria in St Annes it says “A totally unspoilt Victorian building which bears some resemblance to a licensed rabbit warren”. Not surprisingly, neither of these statements still apply. Pubs are often described as “smart”, which is not really a term that would be used today. The only smart pubs now are dining pubs.

While the current longer descriptions are potentially much more informative, much of them are given over to guff such as “Standing next to the 10th century St Ethelbald’s church, the Jolly Plover has impressive views over the flood plain of the River Slutch. Lambert Simnel is reputed to have slept here in 1493” which tell you nothing about what the pub is actually like.

There are also some useful little notes about the general real ale situation in some of the towns listed. For example, “Lancaster has 18 Mitchells houses and 17 Yates & Jackson houses; all sell real ale” and “Macclesfield has 8 different brews in more than 60 pubs”.

Opening hours are shown against each location, rather than against individual pubs, and in general pubs stuck fairly religiously to them. If there were any variations, such as opening later in the mornings, or on Saturday evenings, it is noted against the pub. It was ten years before the introduction of all-day opening, but back then it was much easier to get a drink in a pub before noon.

A few towns still had the traditional market day extensions. There were none reported in Cheshire, but in Ormskirk in Lancashire the pubs were open until 4 on Thursdays, while in Ashbourne in Derbyshire you could drink from 10 to 4 on Saturdays in Marston’s White Hart, and in Oswestry in Shropshire (then called Salop) the Black Lion was open until 4.30 pm on Wednesday and Saturday afternoons.

The substantial number of pubs using electric pumps to dispense real ale is very noticeable. In Cheshire, it is 28 out 92 entries, while on the page of Greater Manchester including Stockport it is 9 out of 27. On the final page of West Midlands including Wolverhampton it is 13 from 27.

The vast majority of pubs were brewery tied houses, in many cases just offering plain Bitter and Mild, but there were the first signs of the multi-beer free house. The Midway in Stockport offered Draught Bass, McEwan’s 80/-, Wilsons Brewer’s Bitter, Boddingtons Bitter, Thwaites Best Mild and Bitter and Pollards Bitter, from a mixture of electric and handpumps, while the Windmill at Whiteley Green in Cheshire has Marston’s Pedigree, Thwaites Best Mild and Bitter, Wilsons Brewer’s Bitter, Boddingtons Bitter and Robinsons Best Bitter and Best Mild, all on handpump.

Stockport has only six entries, compared with twelve in the 2018 edition. These were the long-closed Bridgewater Arms and Golden Lion, and the Arden Arms, Crown, Midway and Red Bull, which are all still going strong. There is also a comment that “Stockport is well off for real ale – with beers from 13 breweries. Robinson’s and Boddingtons’ pubs are safe; choose Wilsons’ with care”. Such later perennial favourites in the Stockport suburbs as the Nursery in Heaton Norris and the Davenport Arms at Woodford are absent, but Holts’ Griffin in Heaton Mersey offers “a good choice of rooms with traditional decor”.

There are sad reminders of fine pubs now lost, such as the Crown at Tiverton in Cheshire, described as “A fine unspoilt old pub” offering McEwan’s 70/- on gravity, which I never got to visit in its original form, Thwaites’ Highwayman at Rainow and Boddingtons’ Railway at Heatley near Lymm, described as “Large, popular and boisterous”.

Obviously a huge amount has changed in the ensuing forty years, including the dramatic expansion of micro-breweries, the rise of the specialist beer pub and the erosion of the tied house system. Probably the change that brought about the greatest improvement to my personal experience of pubgoing was all-day opening, which was introduced in 1988, but didn’t become commonplace for a few years after that.

Whether life for the beer drinker was better in 1978 than in 2018 is obviously open to debate. Some aspects are now better, others worse. But it can’t be denied that in 1978 there were more pubs, they were a lot busier, in total they sold a lot more real ale, and they were used by a wider range of people on a wider variety of occasions