Making a rod for your own back?

Although we in the United Kingdom are still awaiting any kind of official announcement, countries around the world are now publishing their programmes for the progressive relaxation of the coronavirus lockdown. Last week it was the turn of Ireland, which has many economic and social similarities. Their lockdown was somewhat more severe than ours, particularly in terms of travel restrictions, and they are proceeding very cautiously, and certainly much more slowly than the Czech Republic, which I reported on a couple of weeks ago. However, arguably any light at the end of the tunnel is better than none, as the sheer uncertainty of its duration has for many been the most stressful aspect of the lockdown.

It is noticeable that pubs and bars will be right at the back of the queue, not being allowed to reopen until August 10th, while restaurants will be able to trade from June 29th. As I have set out it in the past, it’s very doubtful whether such a distinction would be workable in this country, where many pubs effectively trade as restaurants, and many restaurants have identical licences and planning status to pubs.

However, the trade bodies representing Irish pubs have written to the government proposing a set of measures that would allow some pubs at least to open six weeks earlier, as set about below: 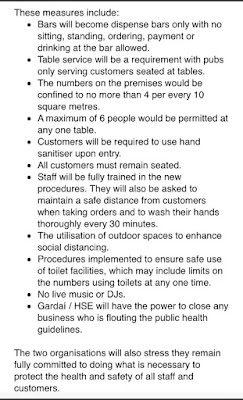 At first sight, this seems to strip pubs of most of what makes them attractive in the first place, and has been pooh-poohed by many in the trade in this country. However, they could well be workable for many food-oriented establishments, and for Wetherspoons, who already have a remote ordering app and table service in place ready to go. Surely some pubs being able to open is better than none at all.

On the other hand, there must be a risk that such restrictions, if they prove workable for some pubs, will be kept in place for much longer than six weeks, thus ending up delaying, or even permanently preventing, the remainder from reopening. And there is a question mark as to what extent the trade should get involved in devising restrictive regimes to operate within. Wouldn’t it be better to await government proposals and then respond to them? As I have said before in connection with the Portman Group’s heavy-handed approach to advertising regulation, “If you’re going to be crucified anyway, it’s little consolation that you’ve been allowed to build your own cross.”

Some in the British pub trade seem to have reacted to the lockdown simply by wringing their hands and saying it’s all too difficult. But pubs are going to reopen eventually and, being realistic, it’s highly likely that initially they will have to operate under some restrictions, so it makes sense to plan for that rather than dismissing it out of hand.

It’s hard to see any pubs – or restaurants – being workable under the strict social distancing guidelines currently in operation. But the two-metre rule was something plucked out of the air, rather like five-a-day and fourteen alcohol units per week. It perhaps served an initial purpose, but it’s not really a sensible yardstick to use going forward.

It’s not difficult to envisage a somewhat relaxed social distancing environment under which pubs were required to operate for a period, including measures such as an overall capacity restriction, no standing at the bar (and possibly a post office-style queue for ordering), no more than four people at a table and groups required to be at least a yard apart. Presumably by this time relatives living in different households, and friends, will be allowed to meet socially in small numbers. The issue of toilets which is often raised is a red herring – the risk of transmission from very fleeting proximity is negligible, and no more than that from passing in a supermarket aisle.

And I have to say that in many of my local pubs, at lunchtimes when there’s no football being shown, it wouldn’t really be too difficult for the customers to keep six feet apart anyway.