I was working on a general post about how the pub trade was still nowhere near out of the woods, when the unexpected announcement came that the government had ordered the closure of all pubs and other hospitality venues in Bolton due to a rise in local coronavirus cases. Some of the reporting of this was a touch disingenuous, just saying they would be limited to takeaways, which is rather like saying you can go to a theme park but just buy candyfloss.

Predictably, the headlines were all about pubs, and it seems that this is yet another example of the finger of blame being pointed in their direction, when it’s widely considered that transmission between households meeting in private homes is just as important a factor, if not more.

And it’s not just pubs, either, it’s the whole of the hospitality sector – hotels, restaurants, cafés and coffee shops too. It’s basically putting Bolton back into the dark days of the height of the lockdown. If it’s impossible to sit down and eat a meal outside your own house, or stay anywhere else overnight, it becomes a huge drag on economic activity in general. If applied nationwide, this would cause huge economic destruction.

An increase in reported cases is an inevitable result of more testing. But there’s little sign of it translating into an increase in hospitalisations, let alone deaths. It’s reported that there is a substantial number of false positives, and many positive results come from traces of the infection still being detected in people who recovered from it months ago. It comes across as a panicky over-reaction from blustering tin-pot dictator Matt Hancock. It is quite disproportionate to the actual level of risk. 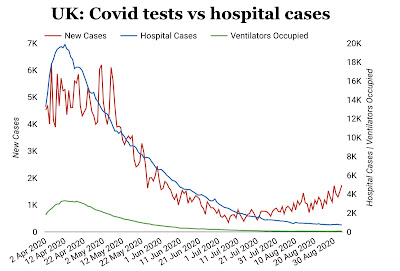 No time limit has been set for the restrictions, or criteria stated as to when they might be lifted. And the question has to be asked whether affected businesses will be entitled to the resumption of furlough and business interruption payments.

If operators across the country fear they may be subject to arbitrary local lockdowns at the drop of a hat, it will seriously erode confidence in the hospitality trade on both sides of the bar. And any exhortations from the government for people to return to work will just come across as weasel words.