A welcome to all ages 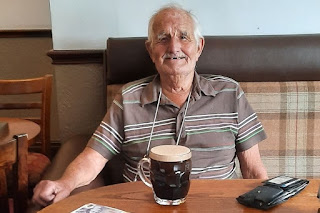 The trade are often keen to make the point that pubs act as a community hub for a wide cross-section of society and are far more than just commercial businesses. There could be no better illustration of this than this heartwarming story from the Manchester Evening News of 93-year old Gordon Williams, who visits the Cart and Horses at Astley near Leigh four afternoons a week, and has been using the pub for 75 years.

Gordon, a former miner, will visit the Wigan pub four afternoons a week and sticks to his classic order of two pints of Joseph Holt Black.

“I don’t understand why more people of my age don't go to the pub,” Gordon says. “It's so sociable, you never need to be lonely. And, of course, the beer is wonderful.”

And he’s right. There is a lot of congeniality and sense of belonging to be found in pubs even if you’re just exchanging a few inconsequential words with other customers.

However, a key point here is that he is able to visit the pub in the afternoon. Pensioners in general much prefer going out in the daytime, and tend to avoid the evenings, especially after it gets dark. Yet nowadays more and more pubs, especially community locals, do not open at lunchtimes during the week. Of course no pub is under any obligation to open when they don’t regard it as profitable, but by staying closed they forfeit any claim to be accommodating the older generation.

But it’s not enough just to be able to get in the pub. People like Gordon want somewhere comfortable to sit rather than having to clamber on to a high stool at a posing table. They don’t want to be hassled if they spend an hour occupying a table while nursing a pint. They expect someone will have a friendly word for them rather than being isolated amongst a sea of self-absorbed dining groups. And, of course, if the pub has already closed down during the carnage of the last couple of decades, it won’t be able to offer a welcome to anyone.

I’ve never been there personally, but it sounds as though the Cart and Horses does an excellent job of meeting all these requirements. But, while the hospitality industry may boast of fulfilling a wider social function, it has to be said that many of the establishments it represents fall a long way short.

The Cart and Horses itself has an interesting history. It has been owned by Joseph Holt throughout its life, and celebrated its centenary last year. But it was in fact a former private residence called Farnworth Lodge that was converted to a pub when Holt’s closed and demolished their former pub of the same name across the road.