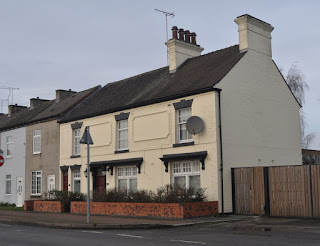 When I was a child, my dad used to sing a fragment of a comic song from before the war that went “I’m going back to Imasas”. But it didn’t refer to some exotic place down Mexico way, but to “Imasas the pub next door.” You can listen to a version here.

However, it seems that the idea of having a pub next door is far from universally popular. Boak and Bailey recently ran a Twitter poll in which 58% of respondents said they wouldn’t want a pub to open next door to their house, and discussed the results here.

Would you be happy if a pub opened next door to your house?

It’s not really surprising that most people don’t want a pub right next door, considering all the noise and comings and goings that it entails. And, compared with a generation ago, pubs are both open considerably later and conduct much more of their business outdoors. It’s unlikely to be a Herne-pattern micropub used by a handful of codgers who are all off the premises by 9.30.

However, realistically, if you live in any housing developed after the First World War, a combination of planning constraints and the limited commercial prospects mean that it’s highly unlikely that anyone actually will open a pub right next door to you. What many areas do have, though, is small suburban shopping parades where the decline of traditional types of shops has opened up an opportunity for a different type of business. But, in practice, any application for a licensed convenience store, a takeaway or a small bar is likely to meet with stiff opposition which is often tinged with snobbery on the grounds that it will “attract undesirables.”

In fact, in recent decades the trend has very much been for pubs to move out of residential areas. Many smaller wet-led pubs in villages and urban backstreets have closed, and the standalone pub in the middle of a large housing estate has been one of the most endangered categories. Where new pubs and bars have opened, it has tended to be in town centres and the more prosperous suburbs or, for dining pubs at least, on retail parks. Some desirable suburban high streets have developed whole strips of fashionable new bars.

While people may not want a pub right on their doorstep, there remains a strong attachment to the idea of having one in the neighbourhood in general. Estate agents’ surveys have consistently shown that a substantial proportion of people see having a “local” as an important criterion when choosing somewhere to live. However, the idealised vision may be in conflict with the reality, and where new housing estates are built it often seems that they generate little or no trade for the existing pubs in the area.

It’s important to remember that pubs are certainly not something with universal appeal. Surveys have shown that almost half of people never visit a pub from one month to the next, although the proportions vary across different age groups. Those who fall into that category are likely to see a local pub as a blot on the landscape rather than an appealing facility.

This discussion prompted me to run a Twitter poll on how many people have a pub or bar within comfortable walking distance of their house. This showed that almost two-thirds of respondents had somewhere that they could call a “local”, even if it might not be right next door. However, I accept that my followers probably aren’t representative of the population as a whole. More than one person replied that they wouldn’t buy a house that wasn’t within walking distance of a pub.

POLL: Do you have a pub or bar within ten minutes’ walk of where you live?

I chose ten minutes as I remember reading a survey that said that, for most people, ten minutes was the maximum they were prepared to walk to a pub, although I don’t have a reference for it. I know some will say “I’d happily walk an hour for a pint of Batham’s”, but most of the population don’t see it that way, and pub owners need to bear that in mind when analysing the appeal of their premises.

The picture at the top shows the Black Hose in Burton-on-Trent, an end-terrace pub where complaints from neighbours were a factor in its closure a few years ago.