Imitation is the sincerest form of flattery 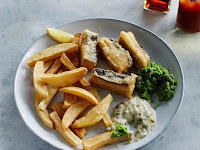 Not content with asking people to avoid alcohol and kill pubs for Dry January, we are also being exhorted to shun any meat-based dishes for Veganuary. Maybe it would be simpler just to rename the month NoFunuary. But, on seeing a recommendation for “Vegan Fish and Chips”, it struck me just how many of the vegan dishes that are promoted to us are actually imitating meat.

OK, if you feel a moral imperative to avoid eating anything that involves the death of animal, you may find ersatz meat a tolerable substitute, but isn’t that effectively an admission that genuine meat is actually tastier and more enjoyable? In a sense that is comparable to alcohol-free beers, which depend on people’s awareness of what normal-strength beer is like. And at least with alcohol-free beers you get the potential advantages of maintaining sobriety and legality, whereas all that imitation meat brings you is a vague sense of moral superiority.

If you want to promote the virtues of plant-based food, surely it would make sense to offer dishes that use fruits, vegetables and grains for what they are rather than pretending to be something else? And the more committed ideological vegans may well take the view that these dishes are in a sense legitimising meat. I’m not sure whether there actually many ideologically committed total abstainers around nowadays, but I doubt whether they drink alcohol-free beer.

It’s not as if imitation meat dishes are a healthier option, either. In fact, they are made in factories from a wide range of heavily processed ingredients and, it could be argued, constitute some of the worst junk food of all. Yes, a low-cost sausage or burger may also contain plenty of additives, but anything the is a recognisable cut of meat or fish won’t.