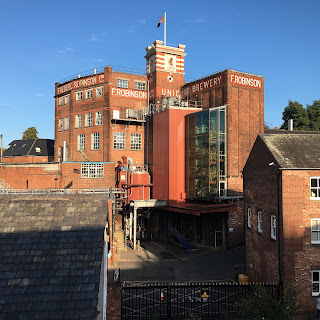 Last week, Robinson’s Brewery announced their intention to invest £12 million to vacate their existing premises in the centre of Stockport and concentrate all their activities on the site of their current packaging centre in Bredbury. While the timing of this news may have come as a surprise, the substance should not have done. The Bredbury facility was opened in 1975 and, as recorded in Robinson’s corporate history,

“...it was recognised that the site was considered to be of sufficient size to enable all of the company’s operations to be housed there at some future time, if this was considered desirable.”

The Bredbury operation has always come across as something that would be fitting for a rather larger company than Robinson’s and, as I wrote five years ago:

This seemed to speak of expectations never quite fulfilled, and I get the impression that Sir John Robinson, who died in 1978 at the age of 82, was a very dominant and ambitious character whose determination was not matched by his three sons, Peter, Dennis and David.

For whatever reason, whether inertia or a change in the business climate, the move never took place, and indeed in the mid-2000s Robinson’s carried out a substantial investment to install an entirely new brewing plant within the existing building. While it wasn’t shouted from the rooftops at the time, this also involved halving the capacity of the brewery to take account of the fall-off in on-trade ale volumes. However, they still lacked a small-scale plant to enable them to make shorter runs of specialist beers, which is something that their local rivals, particularly Hydes, have been able to take advantage of. This was given, maybe rather questionably, as one of the reasons for dropping 1892 Mild a few years ago.

No doubt this will be remedied when the new plant is constructed, and it is also likely to involve a further reduction in the maximum brew length. In the 2017 blogpost I linked to above, I stated that they were then brewing about 30,000 barrels a year, or less than two for each pub they owned, and that included a lot of bottled Trooper sold in the off-trade. The figure will surely be less now – in terms of brewing volumes, they’re really not that big a company, and operating from two sites must lead to considerably inefficiency.

They have also not too long ago spent a considerable sum in creating an impressive new visitor centre and shop attached to the Stockport brewery, an investment that will now have to be written off. Bredbury is not as conveniently placed for brewery tours as central Stockport, although maybe they will regret demolishing the Horsfield Arms which once stood outside the plan and could have served as a brewery tap.

Every brewery attaches its own distinctive character to the beers it produces and, while the beers may be just as good brewed in a new location, they are never quite the same. However, Unicorn is the only beer remaining that has a lengthy heritage with the company, the other main brands such as Dizzy Blonde and Trooper being relatively recent introductions, so it may not be felt to be a significant problem. As a low-volume seasonal product, Old Tom doesn’t really count, and in any case I doubt whether many drinkers could detect a subtle change in character from one year to the next.

This announcement certainly represents a substantial vote of confidence in the future of the company, and the current leading lights of the Robinson family, Oliver and William, have always given the impression of being committed to it in the long term. In recent years, the company has taken a number of decisions that I have found disappointing, such as the axing of 1892 Mild, the severe cull of their pub estate, and the horrible Farrow & Ball style of many of their renovation schemes. But, as I wrote in 2017,

Obviously Robinson’s is a commercial company, and its directors must take the actions they see best to secure its future prosperity, which may need to include grasping nettles and slaughtering sacred cows.

At the end of the day, they are a business, not a heritage preservation body.

It can’t be denied that Stockport’s character will be diminished by the loss of a large working brewery right in the centre, not least by losing that distinctive odour that often wafts over the town. The number of places where this can be experienced is steadily diminishing, although it can still be found in towns like Devizes, Cockermouth and Lewes. 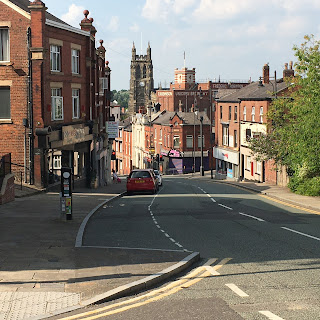 The brewery tower only dates back to the 1920s and, apart from the decoration around the top, isn’t really of great architectural value. To the best of my knowledge, it isn’t a listed building. But it is a very distinctive landmark that adds to the town’s identity, and features in many views of Stockport, so hopefully it will prove possible to preserve it for alternative use, possibly as apartments.