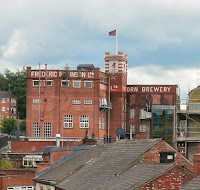 When I first moved into this area in 1985, I was struck by how dominant Robinson’s brewery were in and around Stockport. In the town itself they owned not far short of half the pubs, and in some suburban centres such as Hazel Grove and Marple they enjoyed a near-monopoly. Indeed, after two Wilson’s pubs closed down, they owned all six pubs in the centre of Marple. They also had concentrations of pubs in places further afield such as Sandbach in south Cheshire and large swathes of Tameside. Yet, despite (or perhaps because of) their strong local position, they were never regarded with the same affection as many other independent brewers, notably Boddingtons in the 1970s.

They served real ale in virtually all their pubs, and I always thought their leading product, Best Bitter (now Unicorn) was a fine beer, but it wasn’t to everyone’s taste. There are still CAMRA members around who will say “I just don’t like Robinson’s beer”. There was also the problem of selling a 4.2% best bitter as an ordinary, which led to complaints that it gave you a bad head. And, in the 1980s, they didn’t seem to take much interest in how well their tenants kept their beer so, while many were very conscientious, in some pubs it could be highly variable.

There were also dramatic contrasts in their pub estate. In the 1960s and 70s they seemed to have had an enthusiasm for drastic and self-consciously modern interior refurbishments, featuring white artexed walls, “Spanish arches”, low-level lounge-style chairs and fake bottle-glass window panes, which became known as “Robinsonisation” and gained them a bad name for pub vandalism. By the mid-80s these schemes had become dated and came across as very unappealing. At the same time, their budget for general repairs and maintenance of their estate seemed to be limited, which did result in the preservation of a number of historic interiors, but sadly left many pubs looking just run-down and tatty.

In the 1970s, they built a large new packaging plant on an industrial estate at Bredbury, and apparently at one time there were plans, never realised, to move brewing operations there too away from the cramped town-centre site. This seemed to speak of expectations never quite fulfilled, and I get the impression that Sir John Robinson, who died in 1978 at the age of 82, was a very dominant and ambitious character whose determination was not matched by his three sons, Peter, Dennis and David.

The company certainly didn’t rest on its laurels, most notably with the acquisition of Hartley’s Brewery of Ulverston and its Lake District tied estate in 1982. There was a continued trickle of new pub acquisitions, including some from the big pub companies in the 2000s, although Lees now seem to be more active in that field. The beer range was rebranded, with Best Mild becoming Hatters and Best Bitter Unicorn, and new beers such as Frederics and Dizzy Blonde introduced, as well as seasonal guest beers. But there was always the impression that they were a conservatively-run company who tended to be behind the curve, not leading it.

However, in recent years the next generation has come to the fore, with the leading lights now being William, son of Dennis, and Oliver, son of David. Across a number of fronts they have taken drastic action to deal with the radically changed environment in which brewers now operate. One of the most high-profile was the decision two years ago to axe 1892, formerly Hatters Mild, which only forty years ago had still been the brewery’s best-selling beer. The ostensible reason was that declining volumes meant that the brewery was unable to produce sufficiently small batches. Yet this came across more as an excuse, given that Holts, Hydes and Lees still continue to produce presumably even smaller quantities of cask mild, and Robinson’s themselves brew a keg smooth mild which could surely have been used as the base of a cask product. It was more a case of sending a message that Robinson’s were a forward-looking company who wanted to put the past behind them.

To be fair, they did at the same time introduce an excellent new classic “ordinary bitter”, Wizard, which I’d say has now become my favourite Robinson’s beer. They have also enjoyed great success with the Iron Maiden-themed beer Trooper, which has been exported in bottled form all around the world. Yet, despite this, apparently the current level of production at their impressive tower brewery is a mere 30,000 barrels a year, or less than two barrels a week for each pub they own. The official History of Robinson’s Brewery book does not give any production figures, but I wouldn’t be surprised if at times in the past it has exceeded 100,000 barrels.

They have also carried out a drastic cull of under-performing pubs. The book records that, at the time of the acquisition of Hartley’s in 1982, the combined company owned 416 pubs, but it has now dropped to well below 300, with both urban locals and the smaller rural pubs falling under the axe. Locally in Stockport, well-loved favourites such as the Grapes, Waterloo and Tiviot have been lost. While this is just part of the overall trend that has led to the loss of thousands of pubs across the country, Robinson’s do seem to have been more thoroughgoing than most, and several pubs have gone that I would have thought bankers for long-term success. To their credit, they haven’t imposed restrictive covenants on any of their disposals, and a few have been brought back to life by new owners, but the majority haven’t. And there are quite a few Robinson’s pubs still open that I struggle to see enjoying a long-term future.

Part of the problem with the viability of their pubs seems to be that they seem unable, or unwilling, to provide a financial support package to their urban tenants to enable them to be price competitive. Robinson’s have never been known for being particularly cheap, but when their main competitors were Wilson’s and other members of the Big Six, this didn’t really matter. However, now they’re up against Wetherspoon’s, Sam Smith’s, Holts, independent free houses and some pub company pubs that do have seven-day low prices, they’re left very exposed. Even if both pub and beer are much better, if you’re on a budget it takes some commitment to choose to pay £2.90 in the Robbies’ pub rather than £2 for John Smith’s in the Punch house down the road.

With investment funds available, a growing number of the pubs that remain have been subjected to drastic and often highly insensitive refurbishments, with “removing obstructing internal walls” being a common element. The wholesale removal of comfortable bench seating, replacing soft carpets with hard wooden floors, and making extensive use of cold, unpubby pastel colour schemes, are typical features. One of the worst was the Bull’s Head in Halebarns, which their website describes as “a pub full of theatre and intrigue”, but I’d say is more a monument to impracticality and pretension. And their vandalism of the untouched, National Inventory-listed Holly Bush in Bollington was completely unforgiveable. Fortunately there are still some classic unspoilt pubs in their estate such as the Armoury, Blossoms and Arden Arms, in Stockport, but their numbers are steadily dwindling.

I was distinctly unimpressed by the comments of William Robinson about the smoking ban that “The pub trade has evolved to become much stronger and more inclusive”. Given that the level of beer sales has fallen off a cliff, that comes across as an exercise in self-delusion on a par with Spinal Tap claiming that their appeal had become “more exclusive”. Working-class beer drinkers were once the bedrock of their pubs, but apparently they no longer matter. Sir John must have been turning in his grave.

Obviously Robinson’s is a commercial company, and its directors must take the actions they see best to secure its future prosperity, which may need to include grasping nettles and slaughtering sacred cows. But, by their policies in recent years, I’m afraid the current generation have forfeited a lot of goodwill.