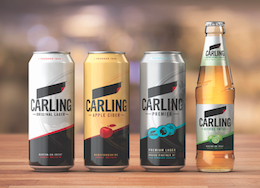 Britain’s best-selling beer, Carling, had recently received a design refresh which I praised on Twitter for its clean, contemporary look and avoidance of any faux-craft design cues. Not surprisingly, someone replied “but it tastes of nothing, so why drink it?” But comments like that completely miss the point about why non-enthusiasts choose to drink mainstream beers.

As I argued here, ordinary drinkers come at beer from a different perspective from enthusiasts. They aren’t interested in novel or challenging flavours; they want something palatable and consistent that serves the twin purposes of refreshment and social lubrication. But that doesn’t mean they’re wrong, or stupid.

Carling may have originated in Canada, but it has been brewed in this country for over fifty years and has become something of a British institution. It’s a clean-tasting yet fairly full-bodied lager, with to my palate a bit more taste and character than many of its direct competitors. I believe it is an all-malt brew and is a major user of British-grown malting barley.

Yes, as a beer enthusiast it’s not something I’d normally choose to drink in the pub, but I wouldn’t turn my nose up at it. I’ve occasionally had a pint on hot days in pubs where it looked as though the cask had been festering in the lines for hours, and I certainly wouldn’t refuse it on principle at a wedding reception or suchlike.

“Cooking lager”, not cask bitter, has now effectively become Britain’s national beer, and in Carling it has a worthy standard-bearer. If you choose not to drink it, fair enough. But if you’re the sort of person who thinks it’s tasteless muck, or that people only drink it because they’re fools who are taken in by advertising, then you need to take a long hard look in the mirror and consider whether you are a massive beer and social snob.