Never the twain shall meet 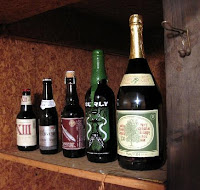 On his Oh Good Ale blog, Phil describes the stock of bottles left over after pre-Christmas over-buying. It’s very noticeable how they divide into two distinct camps in terms of both price and bottle size.


What’s the point here? Just to say that the market is segmenting, and that the prices on the ‘craft’ side of the street really are rather high, when you stop to think about it. On the other hand, having a segmented marketplace doesn’t necessarily mean that beer drinkers have to commit to one segment and no other, or even that brewers have to – although sticking to one market segment would save you the bother of managing multiple different price ranges, which would have to be a challenge. Playing both sides may even become a necessity. There may not always be enough people willing to pay the equivalent of £7-8 a pint for an unknown style from an unknown brewery (or collab); equally, there may not always be enough people willing to pay even a couple of quid for yet another familiar bitter from yet another mid-table brewery. Sadly, beer owes nobody a living.

In the typical supermarket you can see much the same thing – a large Premium Ales section of both bottles and cans, almost all in 500ml sizes, and a rather smaller Craft section, again a mixture of bottles and cans (although in this case you can buy single cans) almost all in the 330ml size. The average unit price will be much higher in the Craft section. How many beer buyers, in practice, mix and match between the two, rather than sticking exclusively to one and ignoring the other?

In a sense, the craft brewers have been successful in carving out a niche that is easily identifiable by pack size, and where they succeed in charging a relatively higher price. The same is true in pubs of “craft keg”, which is immediately marked out as something apart from cask, and again commands a noticeable price premium. While it lasts, that’s a good place to be, but ultimately a niche is self-limiting, and the time may come when people start wondering whether it’s really worth paying the same for a 330ml bottle of this as they can for a 500ml bottle of that of exactly the same strength.

Cloudwater’s retreat from cask may look like an astute business decision, but isn’t it partly a deliberate avoidance of going head-to-head with the big boys? And you do have to question whether Thornbridge’s move from 500ml to 330ml bottles, often at much the same price, and often for beers of modest strength, will prove to be limiting in the long run. I can’t honestly see that in a couple of decades’ time 330ml is going to become the standard size for off-trade beers, nor a half or two-thirds for draught in the pub.