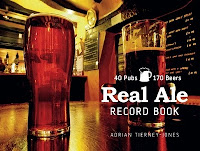 Beer writer Adrian Tierney-Jones contributes regular pub reviews to the Saturday edition of the Daily Telegraph and also produces the stimulating Called to the Bar blog. He has now come up with an intriguing little volume called The Real Ale Record Book. I was kindly sent a copy of this to review, so here goes…

It’s a compact, landscape-format hardback retailing for a rather steep £9.99. Inside, there is a brief introduction to British beer styles and suggestions on how to taste beer, but the main bulk of the book is divided into sections for the various regions of the UK, highlighting five pubs and 21 beers for each area, and inviting the reader to tick each off when he has visited or sampled it, and add his own comments.

The pubs selected for the North-West are the Marble Arch, Manchester, Doctor Duncan’s in Liverpool, the Creek Inn at Peel in the Isle of Man, the Bhurtpore at Aston in Cheshire and the Watermill at Ings in the Lake District – all excellent in their own way but barely scratching the surface of the many fine pubs the region can offer. Local beers listed include Holts Mild, Hydes Original Bitter, J. W. Lees Bitter and Robinsons Old Tom, although there is a rather unfortunate error when he refers to Holts still sending beer out in “36-gallon hogsheads” (a hogshead is, of course, 54 gallons, a 36-gallon cask being a mere barrel).

40 pubs for the whole of the UK is very few, and given the wide geographical spread few people will be able to visit anywhere near all of them. Over the years, I have managed 13. To be honest, it’s hard to see who this book would appeal to, as any genuine enthusiast will probably already be aware of all of these pubs and beers anyway – after all, there’s far more information in the Good Beer Guide. On the other hand, the pubs and beers listed are definitely at the enthusiast end of the market, and so might prove a bit obscure for anyone not ready to graduate to the GBG.

It gives the impression of being a book commissioned by the publisher to fit in with a particular concept rather than springing from the mind of the author. Adrian himself describes it as an I-Spy book for grown-ups. Perhaps the best that can be said for it is that it might make a suitable Christmas stocking-filler for a beer-lover, or maybe a Father's Day present. But I can’t see many people spending their own money on it – and if someone was buying me a present I think I’d prefer four bottles of Old Crafty Hen for the same price.

I like Adrian’s writing and I don’t really feel this slight volume does justice to his talents.

I probably won’t be sent any more books for review after that one…
Posted by Curmudgeon on June 08, 2010