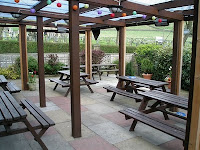 Last year I wrote about how few pubs had made much of an effort in providing smoking shelters. But I said in the comments “I think it will slowly come, as the better-run, more forward-looking pubs realise that they need to cater for all their customers,” and since then I’ve noticed quite a lot of investment going on in this area. For example, the Railway at Rose Hill now has a very smart elevated, covered area of wooden decking at the rear, while the beer garden at the Armoury in Edgeley, once little more than a patch of grass, now has two substantial separate shelters and bears a distinct resemblance to a grotto. I’ve seen several pubs with a notice outside advertising, amongst other facilities, “Covered, heated smoking patio” – so it’s becoming an important point of differentiation. No doubt the Righteous will moan about the patio heaters causing global warming, but they should have thought about that before imposing the smoking ban in the first place.

I was talking to a smoker who still does go to pubs, and he said that it’s very clear which pubs, within the current law, extend a welcome to him, and which don’t, and that obviously influences his choice of where to give his custom.
Posted by Curmudgeon on July 24, 2010