A taste of the West, and the East 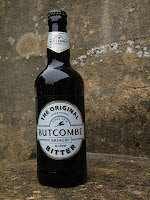 I’ve expressed my liking before for Butcombe Bitter, a beer that for me is always associated with being on holiday in the West Country. It’s a distinctive bittersweet copper-coloured beer with a strong hop character and a kind of earthy, rustic note. Apparently it was the biggest selling draught beer brand in the UK not available in bottle, but that has now been rectified. (The speling misstakes in the hedding are quite amuseing) I picked up a bottle from Morrison’s the other day. It’s stronger than the cask, at 4.5% ABV rather than 4.0%, but otherwise seems to have much the same character. This will definitely be a repeat purchase. 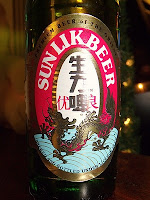 Another interesting bottled beer I picked up in Morrison’s was “Sun Lik Chinese Beer”, at a bargain £1 for 500ml of 5.0% ABV. This has a deliberately naïve-looking label that suggests a genuine Chinese import, but on closer inspection it turns out to be brewed under licence by Shepherd Neame in Faversham. With rice as a declared ingredient, it’s an inoffensive, sweetish but surprisingly full-bodied lager that would be ideal for washing down Oriental food, but is never going to really challenge the tastebuds.
Posted by Curmudgeon at 4:35 pm