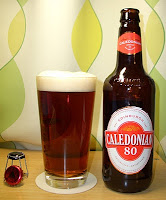 Ten or more years ago, beers from the Caledonian Brewery in Edinburgh were a common sight in the off-trade. More recently, they seem to have largely disappeared, at least around here, so I was pleasantly surprised to see both Deuchars IPA and 80/- on sale in my local convenience store, of all places, albeit at a rather steep price of £1.95 per bottle or £5 for 3. (A few years ago they did briefly have Deuchars in cans)

Caledonian 80/- (shown just as “80” on the label) is probably now the definitive remaining example of the rich, malty Scottish 80/- style. It’s a deep mahogany colour with a moderate but lasting white head. Malt of course dominates the flavour, but it’s fairly dry and there’s a subdued spicy hoppiness in there too. It has a full mouthfeel and a soft, restrained carbonation. The distinctive Caledonian house character, with a creamy texture and notes of caramel and vanilla, is very much in evidence. Perhaps more than any other established brewery, all of Caledonian’s beers have an instantly recognisable common character which I believe derives from caramelisation of sugar in the brewery’s unique open-fired coppers.

In summary, an excellent, well-made classic beer which effectively defines its style and makes an ideal antidote to the modern wave of pale “tropical fruit” hoppy ales.
Posted by Curmudgeon on March 18, 2011