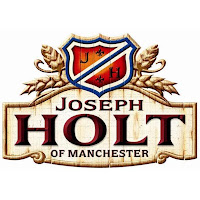 While we have any number of seasonal and one-off beers, it’s still a rare event for an established brewer to make a permanent addition to their range. That, however, is what Holts have done with the introduction of Holts IPA, a lighter and hoppier counterpart to their standard Bitter, which weighs in at 3.8% ABV as opposed to 4%, and sells for a couple of pence a pint less.

While Holts Bitter remains a distinctly dry and bitter beer, it has undoubtedly become darker and maltier over the years – it isn’t the pale, “shockingly bitter” brew that people recall from the 1970s. So IPA could in a sense be regarded as a return to their roots, although undoubtedly the inspiration is the growth in “golden ales”. I was quite impressed by my first sample – it was more robustly hoppy than I expected, yet still with a firm malt underpinning. A wishy-washy, floral golden ale it is not.

I do hope, though, that Holts IPA doesn’t go the way of Samuel Smith’s Tadcaster Bitter, a very palatable pale bitter introduced in the mid-80s that offered a good contrast to the darker, maltier Old Brewery Bitter, but which never managed to sell alongside it, probably because if you just asked for “Bitter” you always got OBB. But the world has changed since then, and Holts IPA has the advantage of being easy to ask for by name, so I doubt whether it will prove a flop.

Robinson’s somewhat similar Dizzy Blonde has now become a permanent beer alongside Unicorn, and appears in a growing number of pubs. When it first came out I thought it rather insipid but recent samples have shown a fuller body and firmer hoppy bite.
Posted by Curmudgeon on March 06, 2011