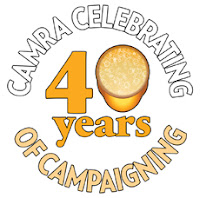 Today, the Campaign for Real Ale celebrates its fortieth anniversary. There can be no doubt that during its lifetime CAMRA has played a central role in promoting the appreciation of beer in Britain, and of ensuring real ale remains a widely-available, mass-market drink not just confined to a handful of specialist outlets. Here is an article I wrote six years ago reviewing CAMRA’s achievements.

However, there is an important piece of context that needs to be added. You sometimes read (although not, to be fair, in CAMRA’s press release) that the organisation’s campaigning led to a huge upsurge in real ale sales. In fact, the amount of real ale sold in Britain today is probably less than a fifth of that in 1971 when it was founded. The main reasons for this are the rise in lager from about 5% of draught beer in 1971 to two-thirds today, and the steady decline in on-trade beer drinking.

While real ale was hard to find in London and much of the South-East in 1971, it was still widely available in other parts of the country. Just think of the extensive tied estates owned by the likes of Wolves & Dudley, Home and the six (then) Greater Manchester family brewers, all overwhelmingly selling real ale in far greater volumes than today. Plus there were still large real ale bastions in the hands of the “Big Six” such as Tetley in Yorkshire, Bass in the Midlands and Courage across a wide swathe of the South and South-West.

From a London-centric point of view, the 1970s did indeed see a boom in real ale sales. But, across the country, there will have been very few, if any, years since 1971 that saw an absolute increase in volume sales.
Posted by Curmudgeon on March 16, 2011