Then they came for the white cider drinkers 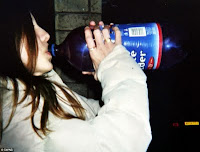 A report commissioned by Alcohol Concern has called for the withdrawal of superstrength white cider from the market “because of the harm it causes to homeless people and other vulnerable groups”. Not exactly a surprise conclusion there, then.

Now, you may well think white cider is a load of crap, and it may well be true that it is disproportionately consumed by problem drinkers. But it would be setting a worrying precedent for government to seek to dictate the types of alcoholic drinks that can be legally sold and indeed to exclude a whole category from the market. Is it really going to stop there? Some of the recommendations, in particular that duty should be increased for all ciders over 5%, also have much wider implications.

If the homeless are deprived of white cider, they’re just going to turn to something else instead – they’re not going to miraculously give up drink overnight.

And hasn’t the tax on white cider been increased recently anyway because it would typically have a juice content well below 35% and thus would be taxed as “made-wine” rather than enjoying the lower cider duty rate?
Posted by Curmudgeon on April 18, 2011