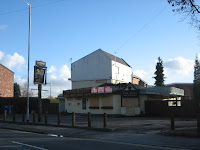 If you were a brewer who had closed a pub, it would obviously make sense to remove any identifying signage without delay, as a decaying, boarded-up establishment carrying your branding would convey a very poor impression. So you can’t blame Robinson’s for whipping their signs off the Grapes on the first working day after closure.

In contrast, it has taken Hydes over a year after closure to remove their identity from the Four Heatons just down the road from me. Thousands of people will have passed by every day and made the inevitable association between Hydes and failure. Possibly this presages redevelopment of the site, which at present is an unpleasant eyesore.
Posted by Curmudgeon on February 16, 2012