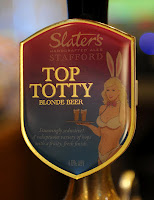 There’s been plenty of discussion about Slater’s Top Totty ale being banned from the House of Commons bar following a complaint by some humourless, politically correct Labour harridan. But, as often said, no publicity is bad publicity:


Last night Vicki Slater, of Slater's Ales, said: ‘At first I just couldn't believe it that in this economic climate a Labour MP would get exercised about the name of a beer.

‘But all this publicity has been a blessing. After the fuss, it sold out immediately. People have been phoning from all over Britain asking us to supply their pubs. We're delivering twice as much Top Totty tomorrow as we ever have before.’