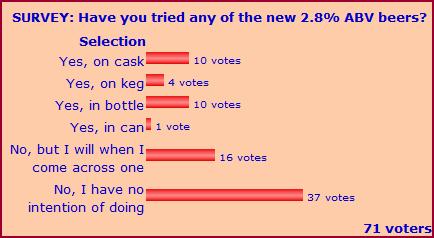 I asked blog readers whether they had tried any of the 2.8% ABV beers introduced to take advantage of the reduction in duty brought in last Autumn. Just over half had no intention of doing, while about a quarter said they would if they came across one, and the remaining quarter had tried a variety of them, mostly in cask and bottled form.

Prompted by this blog posting from Steve Lamond, I did put a couple of them in my trolley at Tesco last week – Greene King Tolly English Ale and Fuller’s Mighty Atom. They were £1.39 each for a 500ml bottle, which is cheaper than Tesco’s standard price of £1.99, but you can still get regular-strength premium bottled ales for less, for example in Morrisons’ 4 for £5.50 offer.

In contrast to Steve, I thought the Mighty Atom was the better of the two, with a more interesting and complex mix of flavours. The English Ale had a hint of the typical GK house character, but little else. Both seemed oddly gloopy in consistency, as though the low alcohol content had been achieved by arresting fermentation and leaving a lot of unfermented sugars in the beer, and both exhibited notably poor head retention. I might try the Marston’s one as well, but I can’t say I’ll be making them regular purchases. They seemed to be trying to ape the flavour characteristics of stronger beers rather than simply coming across as honest low-gravity beers in their own right.

As a comparison, I also had a bottle of the 3.4% Brakspear Bitter, a mere £1.09 from Home Bargains just down the street in Edgeley from the closed Grapes. This was a much better and more satisfying drink – a classic English ordinary bitter with a dry edge and a distinctive, earthy hoppiness. And it kept at least some head to the bottom of the glass.

As I mentioned here, I also tried a pint of Sam Smith’s 2.8% Light Mild, which is not a new beer as such, but had its strength reduced from 3.0% to take advantage of the duty concession. This was a nitrokeg, so I didn’t expect much, and I wasn’t disappointed. Bland and inoffensive, but if you were on a budget and just wanted a generic pint in the pub it might appeal.

Over the years I have had a number of very enjoyable beers of this kind of strength in cask form, such as the famous home-brewed pale ales from Mrs Pardoe’s at Netherton and the All Nations at Madeley, and even, on occasions, the much-derided and surely now defunct Whitbread West Country Pale Ale, which had a declared OG of 1030. A defining characteristic of all these beers was that they were honest in what they set out to be – light, subtle and easy-drinking – and didn’t try to be something they weren’t.

I also suspect that the flavour characteristics of dark milds are likely to suffer less from being brewed at such a low strength than those of pale beers.
Posted by Curmudgeon on February 15, 2012