What’s that say then?

Blogger have recently introduced a new word verification “captcha” for comments, which a lot of people have complained is very difficult to decipher. See, for example, this discussion on Mark Wadsworth’s blog.

The reason I originally turned on word verification was to stop an avalanche of spam. Following a complaint, I experimentally turned it off again, but the spam flood resumed, so it went back on again about 18 hours later.

Some bloggers have responded by restricting comments to those with Blogger and OpenID accounts, but I tend to feel the anonymous comments are often some of the best on this blog.

So what do you think would be the best policy for me to adopt? I will run the poll until Saturday, but please note I won’t necessarily be bound by the result.

Edit: The results of the poll are shown below. As more than three-quarters were happy to retain the harder captcha, and anonymous comments, I’ll be sticking with the status quo. If you really have something burning to say, and can’t manage the captcha, e-mail me your comment and I’ll add it manually. 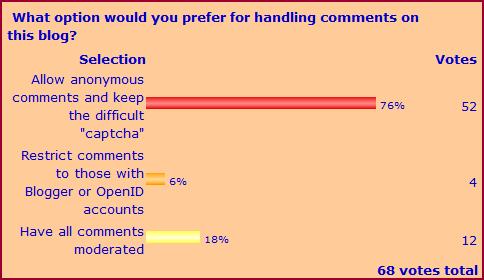