Learn from the masters 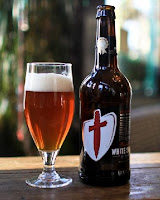 The recent Tesco 4 for £6 offer has led me to buy more bottles of White Shield than I would normally do. This is a classic beer and one for which, despite recent travails and brewery moves, I still have a lingering affection. It still always seems a touch sweet, though, when I remember it from its glory days of the 1980s as a distinctively, even aggressively, dry beer.

Of four recent samples, one has been a bit flabby, but the other three have demonstrated real evidence of having conditioned in the bottle – dense spires of carbonation rising to create a huge, rocky head. That is what you want in a bottle-conditioned beer. And the yeast stays firmly stuck to the bottom, so it’s easy to pour it clear.

It may seem obvious, but “bottle-conditioned” means a beer that actually conditions (i.e. ferments) in the bottle. Hence it is well carbonated and forms a dense head. This can be seen in classic Belgian beers such as Duvel and Chimay.

Far too often nowadays, a “bottle-conditioned” label from a British micro-brewery results in a bottle of flat, cloudy liquid that somehow aspires to be like a pub pint of “real ale”, but ends up like the kind of pint you immediately return to the bar. The makers of such rubbish need to bone up on what bottle-conditioning really means, and how to do it.
Posted by Curmudgeon on April 08, 2012