Prohibition on the menu 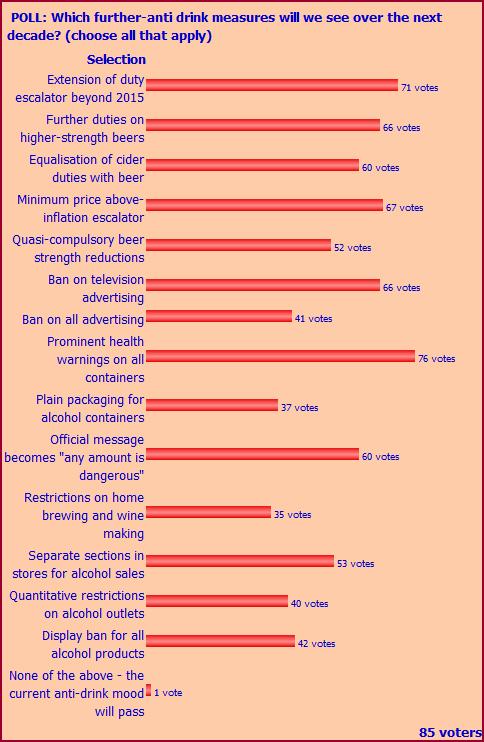 An impressive 85 people responded to the poll on what further anti-drink measures we are likely to see in the coming years. Bear in mind that none of these are actual declared government policy at present. There was just a single Pollyanna who believed that none of this would come to pass – I’d happily bet a substantial sum of money against that eventuality.

Not surprisingly, “Prominent health warnings on all containers” topped the poll, with “Extension of duty escalator” second and “Minimum price escalator”, “Further high-strength duties” and “Ban on television advertising” following closely behind. It is maybe surprising that there has been little movement on advertising restrictions so far. Perhaps the health establishment realise that advertising doesn’t really boost overall consumption, although curbs would undoubtedly advance the “denormalisation” message. And remember, beer geeks, that the more advertising and promotion is restricted, the harder it becomes to launch new products into the market.

Some might feel that a list such as this is giving the neo-Prohibitionists ideas, but in reality all of these measures have already been mooted by them on occasion.

“Restrictions on home brewing and winemaking” got the lowest vote, and indeed there’s no prospect of that at the moment. But if we end up with a minimum price going well north of 50p/unit, the incentive to do this is going to become much greater, and it may be perceived as undermining the overall anti-alcohol strategy. So, remember, you read it here first.