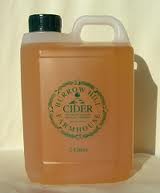 When the government made its announcement about minimum alcohol pricing, I made the following point:


And how much does scrumpy sell for at the farm gate in the West Country nowadays? Indeed, does the farmer even know how strong it is? If it’s 8%, a pint will cost £1.82, which I suspect is rather more than the current price.

It seems I was right, as the cidermakers have been quick off the mark to spot this and start a government petition to Save our Scrumpy. I’m sure the policy was never designed to clobber small farmhouse cidermakers, and this campaign has considerable potential to cause embarrassment to the government. Labour’s plan in 2010 to increase cider duties overall by 10% certainly provoked a groundswell of popular opinion against it.

The picture is taken from the Burrow Hill cider brandy website, and I suspect the author of the petition, Edward Temperley, is a relative of Julian Temperley who runs Burrow Hill. On that page, the 6% farmhouse scrumpy sells for £6.80 for a 4-litre container, which is 28.3p/unit, well below the proposed 40p minimum price. As I doubt whether Burrow Hill is small enough to qualify for the small producers’ duty exemption, others must be able to sell it for even less.

You can imagine many farmhouse cidermakers just giving up, or alternatively just making cider for family and friends and others “in the know”.
Posted by Curmudgeon on April 19, 2012