Trying to make sense of it all

I recently wrote about the third anniversary of my Closed Pubs blog and made the comment that “it’s all kinds of pubs – estate pubs, suburban roadhouses, country pubs, village pubs, urban locals, edge-of-town pubs, market town pubs.” However, it can’t be purely random, so I’ve taken a long hard look at the closed pubs I had included on the blog and seen for myself to try to work out whether there was any clear pattern that could be discerned. And some obvious trends did become apparent. 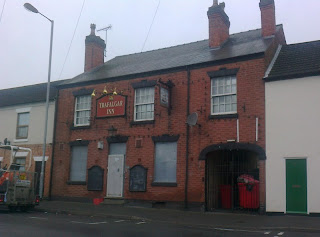 The most obvious is that pubs in working-class areas have suffered worst. In a sense, this is inevitable, as historically most pubs have mainly catered for working-class drinkers but, even so, it seems to be disproportionate. Such areas have been most vulnerable to depopulation and redevelopment, the decline of traditional industries, changes in ethnic mix and the growing gulf between pub and off-trade prices. Smoking prevalence is also much higher amongst working-class people. Within this area, pub closures can be divided into a number of categories: 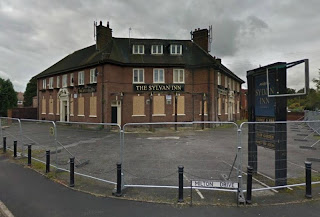 Second is that big pubs, whether estate pub or roadhouse, are more vulnerable than little ones. They are more attractive for residential redevelopment or conversion to convenience stores, they cost more to run, they need more customers to make them viable and many of them were probably never all that appealing in the first place. For example, in Withington in South Manchester, the massive White Lion and Manor House (ex-Golden Lion) have shut down, but smaller pubs like the Albert, Turnpike and Victoria are still going strong.

Third, and maybe counter-intuitively, isolated pubs in residential areas have suffered worse than those grouped with others. People often say “but it’s the only pub for a mile around” but clearly that hasn’t saved it. In some cases, these pubs have struggled to balance the needs of various customer groups, but it shows that the idea that people come home from work, have their tea and then go out for a few drinks at their local is not necessarily the standard pattern of pubgoing. Many pub visits are generated for reasons other than there being a pub on the doorstep, and chimneypots are no guarantee of survival, whereas pubs often seem to prosper by being part of a “circuit”. This applies to a number in areas of Victorian housing as well as those on 20th century estates. For example, returning to Withington, the Cotton Tree, which was in an area of housing about half a mile from the village centre, with no other nearby pubs, has closed down, but there are still five pubs in fairly close proximity in the centre. 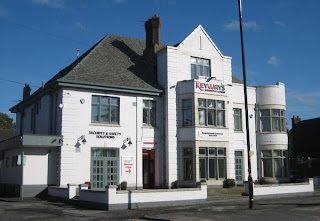 The class factor works the other way too, as there seem to be some areas that are quite simply too upmarket to sustain pubs. For example, we have seen the closure of the Bleeding Wolf in Hale, Corbans (ex-Unicorn) in Halebarns (shown above) and the Royal Oak in Alderley Edge, all locations with no shortage of either spending money or potential customers living nearby. The residents may well socialise in restaurants or each other’s houses, but they no longer do it in pubs.

Market towns in general do not seem to have suffered too badly, likewise the smaller and more isolated coastal resorts. Possibly the existence of a captive market is a factor here, if the nearest big town is too far away to be easily reached for a night out, while they may also function as a hub for surrounding villages. Even here, though, the demise of traditional coaching inns is very noticeable, and peripheral pubs have suffered more than those in the centre. 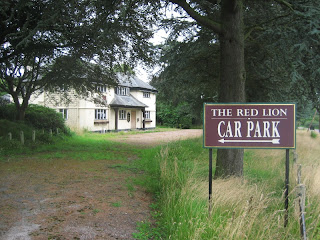 The growing unwillingness to drink and drive even within the legal limit has undoubtedly led to a general thinning-out of pubs in villages and rural areas although, depending on the available catchment area, some have carved out a new niche by going all out for the upmarket “country dining pub” trade – but that is a lot more fickle than local boozers and really only as dependable as the last meal served.

Even so, in most areas there still seems to be a smattering of all-purpose and wet-led pubs, suggesting that the available trade has reduced rather than entirely disappeared. Ironically, this often means that pubgoers end up driving further than they used to. I can’t think of any rural areas that have been largely denuded of pubs in the way that some inner-city areas have been, although I believe this may have happened in some of the remoter, non-touristy parts of East Anglia. Some pubs seem to get into a downward spiral of frequent changes of licensee and format, eventually resulting in closure, whereas those with more continuity and a clear sense of purpose have remained in business.

In contrast, there are three distinct types of area where pubs and bars continue to thrive and indeed grow in numbers:

But, across the generality of struggling, workaday, provincial Britain, the pub sector has witnessed a drastic retrenchment in the past fifteen or so years that once would simply not have been conceived as credible. I don’t propose here to get into the debate as to what extent the lost pubs have been replaced by “bars” or other types of licensed outlet, but that large numbers of once viable and often prominent pubs have closed is indisputable.
Posted by Curmudgeon on September 02, 2013