No fun any more 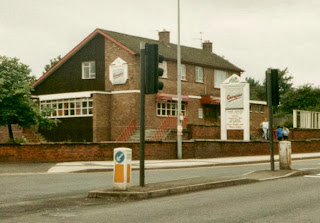 Discussion of changing pub names reminded me of a category of pub that seems to have largely vanished from the face of the earth – the “Fun Pub”, or “Young People’s Pub”, or, as often dismissively referred to by CAMRA members, the “Kiddy Pub”.

At one time during the 80s, this was all the rage. Take one struggling pub, preferably one on a prominent site, give it a makeover including pool tables, wall-to-wall TV screens, bright lights, loud music and garish decor majoring on white and bright pink, strip out bench seating in favour of high-level stools, give it a new name with an S on the end such as Chaplins or Bogarts, and there you go. The picture shows one in Brownhills near Walsall which was changed from the George and Dragon to “Georgies” – and, of course, is now long since closed.

Around here the Pennine Hosts managed pub arm of Grand Metropolitan seemed to be the worst offenders, but they weren’t alone. We even had the former Golden Hind in Offerton renamed as “Drakes”. Very often, any cask beer was removed, but sometimes an apologetic handpull remained dispensing ill-kept Webster’s Yorkshire Bitter so it could be criticised on CAMRA pub crawls.

The whole thing was very typical of the 80s boom, redolent of Loadsamoney, Stock, Aitken and Waterman and the Escort XR3i, and gave the impression that the designers had been watching too many Brat Pack movies and re-runs of Tom Cruise in Cocktail. I’m not sure that these pubs ever did the hoped-for business, as for every customer who was attracted at least one other would be deterred. Added to this, the redecoration schemes were very much done on the cheap and it wasn’t too long before they started to look decidedly frayed at the edges.

So, as we moved into the 90s, the concept withered on the vine. The pubs began to be converted back into something rather more mainstream, with a bit more food and a bit more seating, or, increasingly, they ended up being declared unviable and closed altogether. While you do get youth-oriented bars in the nightlife sections of major towns and cities, outside of those areas pubs specifically targeted at that market seem to have largely disappeared.

It’s not something I personally miss, but it’s an interesting example of how the pub scene has changed over the years. I also get the impression that the drinking and socialising patterns amongst the younger age group that once sustained these pubs, to a greater or lesser degree, twenty-five years ago have largely vanished.