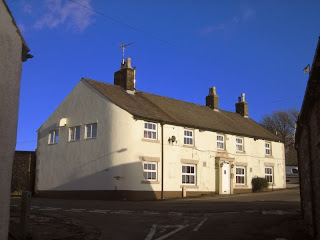 Here’s another in my occasional series of landmark pubs that have called time forever. This is the Wanted Inn at Sparrowpit in the Peak District, on a notoriously sharp bend on the scenic A623 road between Chapel-en-le-Frith and Baslow. Originally called the Duke of Devonshire, it gained its more recent name because in the 1950s the Devonshire Estate decided to dispose of it, and it took nearly two years before it found a buyer who “wanted” it. This may have been Robinson’s brewery, as for many years it was one of their tied houses before it fell victim, along with plenty of others, to their recent pub cull. The StreetView image from November 2012 shows that it survived long enough to gain Robinson’s new livery. The hamlet of Sparrowpit has thirty or so houses, so some people will no longer have a local pub within walking distance.

Only about three miles away, Robinson’s have also recently closed the handsome Crown & Mitre at Chinley, but as the forecourt seems to be being used as an extension of the used car dealership opposite it wasn’t possible to get a decent photo. I recall many years ago listening to a female customer in this pub going on at great and tedious length about the quality of own-label groceries sold by ALDI.

Incidentally, it is my understanding that Robinson’s are not applying restrictive covenants to any of these pubs, so if you fancy taking one on the opportunity is there. Don’t all rush at once.