The world is your apple 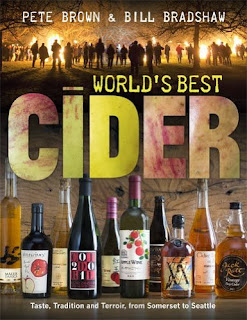 In 1977, Michael Jackson produced the World Guide to Beer, which was the first attempt to look at beer on a global basis, identify the various styles in a systematic way and examine how different countries’ brewing traditions fitted together. It went through various editions and arguably has proved the most influential book on beer ever written and a cornerstone of the modern beer enthusiast movement.

Now, well-known beer writer Pete Brown, in conjuction with photographer Bill Bradshaw, has attempted to do the same for cider with his new book The World’s Best Cider. It’s a substantial large-format volume of 256 pages, lavishly illustrated throughout with many of Bill’s photographs which can also be seem on his IamCider blog. It begins with sections defining what cider is and running through its often rather imprecise history, before moving on to look at each cider-producing country in more detail, with descriptions of each region, features on a variety of cidermaking personalities and listings of selected ciders that can be ranked amongst the world’s best.

Although the large-scale industrial cidermakers are not ignored, it is made clear that this is a book celebrating the more distinctive and artisanal end of the spectrum. On the other hand, there is a certain amount of criticism of CAMRA’s narrow-minded definition of “real cider” which excludes many high-quality products and makes the definition of “real beer” seem broad and inclusive.

Cider has a long and honourable tradition in various countries including the UK and Ireland, France, Germany and Spain, but for various reasons has always had to play second fiddle to the major drinks categories of beer, wine and spirits, and therefore often ends up being misunderstood. It is also notable that there has been considerably less cross-fertilisation of styles and methods than there has been with beer, resulting in wide differences between the various countries’ cider cultures. However, as with beer, there is now a growing movement of new-wave “craft” cidermaking to build on the established traditions and look towards other countries’ practices.

I make no claim to be an expert on cider, and I certainly learned a great deal from the book that was new to me. For example, it isn’t widely realised that the UK and Ireland drink more cider than the rest of the world combined, even if much of it is Magners and Strongbow, and that the second largest market is South Africa. While I had vaguely heard of it, I certainly hadn’t appreciated what the strange fermentation technique of “keeving” actually involved, and nor had I realised that the agricultural heartland of Austria had a strong and locally celebrated cider and perry tradition. And I had never heard of the unique Quebec method of producing “ice cider”, which involves freezing the apples to separate out juice from water and results in a strong, sweet yet never cloying beverage that has been described as “like drinking starlight”.

It seems churlish to criticise, but perhaps more could have been said (as Rhys Jones mentioned in a review in Opening Times) about where these various ciders can actually be purchased and, while there is a page on traditional cider houses, the West Country pub cider-drinking culture is underplayed. There are also a few examples of black text on a brown mottled background that is a little hard to read, even before any cider has been consumed.

But, in summary, it’s an attractive, well-written, accessible yet authoritative book that is essential reading for anyone whose interest in cider has progressed beyond Strongbow and Magners. The cover price is £25, but it is available from Amazon at £13.85, and if you follow the links on that page can be obtained for as little as £10.79 including P&P. I have to admit to feeling a slight twinge of guilt for getting it so cheaply, but I’m sure Pete Brown’s wallet can stand it and at least I paid for it rather than getting a free review copy.

Another cider book that is well worth reading is Ciderland by James Crowden which very much concentrates on the West Country and does a good job of getting to the heart of the indefinable atmosphere of “cider country”. And I paid full whack for that!