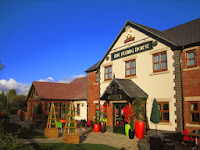 Last week I referred to the imminent opening of the Flying Horse, Greene King’s new Hungry Horse pub in Heald Green. As new-build pubs in and around Stockport are as rare as hen’s teeth (what was the last one? Three Bears? Micker Brook?) I thought I should go along and take a look.

It’s an impressively large building, mostly of red brick, with some white-painted facings and contrasting mock-quoin detailing on the corners. There’s a large car park at the back, but unusually you have to walk round to the front to get to the main entrance. I spotted later that there was a small back door, but it isn’t at all conspicuous. There are signs saying that there is a two-hour time limit in the car park. It’s questionable how enforceable this is, as all they can do is send out an imitation “fine” which you can probably safely ignore. Proximity to the airport is obviously the reason for this, but even so it’s easy to see a celebration meal with a large party extending for more than two hours, so I would have thought three more reasonable.

As you enter through the front door, the long main bar is in front of you. On the right is a lounge-type area with extensive bench seating and a “public bar” with large-screen TV and pool table where there is a sign saying “Over 18s only”. To the left, extending up to the conservatory, it is more restaurant-like with free-standing tables and seating booths. The decor makes extensive use of wood and dark blues and reds, and the overall impression is much more pub-like than many of Wetherspoon’s recent efforts such as the Kingfisher at Poynton. There is a large outdoor seating area that is ideal for watching planes coming in to the airport, but the covered smoking area at the rear is small and apologetic. For a midweek lunchtime only a few days after opening it was remarkably busy, with probably at least 75% of tables occupied in a very large pub.

There are two banks of handpumps dispensing Greene King IPA, Old Speckled Hen and Abbot Ale, but they are at each end of the bar and so not immediately obvious on walking in. The IPA is £2.95 a pint and the others £3.05 – par for the course for the area and type of pub. All are served in branded glasses, with the one for IPA being a dumpy, smooth-sided tankard which won’t be to everyone’s taste. The IPA I tried was in perfectly good condition but, as usual with this beer, rather bland. There’s a wide range of kegs and lagers, none of which, interestingly, are Greene King products – even the smooth ale is John Smith’s. World lager fans will note the availability of Brahma on tap.

Obviously there is an extensive food menu of a fairly cheap and cheerful kind, majoring on burgers, steaks and pub favourites. The prices and quality are similar to Wetherspoon’s, although with rather more choice overall. Most main courses are in the £6-£7 range. Only wanting a snack, I went for a “Big Burrito” which seemed to rather miss the point by mixing the rice, sour cream and guacamole in with the beef chilli filling rather than serving them separately. It’s a long way from fine dining and I can’t help thinking that pubs of this type often rather underestimate the food tastes of their target market, but presumably Greene King have done their research thoroughly.

In summary, it’s obviously a chain dining pub and has to be accepted for what it is. It’s not going to win any awards for an innovative beer range, gourmet food or pub atmosphere. But it actually feels more like a pub than many of the genre and is actually somewhere you would not feel out of place just going for a drink. It could be a lot worse.

The location is here at the junction of the B5166 Styal Road and Longstone Road. While most people would consider it to be Heald Green, it is actually just over the boundary into the City of Manchester and so would more properly be described as Moss Nook. It will be interesting to see what effect it has on the business of the nearby – and much more characterful – Tatton Arms, which Robinson’s refurbished a couple of years ago.