Going Down to Liverpool – Part 1

Our latest Beer & Pubs Forum Proper Day Out involved a visit to Liverpool on Friday 4 October. I grew up in Runcorn, from which Liverpool was the closest and most accessible big city, so in the late Seventies and early Eighties I became very familiar with its pubs. However, I hadn’t been back there for at least twenty-five years, probably longer than I had last visited Preston. There’s really too much in Liverpool for a single day to do it justice, so we decided to concentrate on the pubs in and around the downtown business district around Dale Street which is the original heart of the city.

While the city centre hasn’t experienced the dramatic rebuilding of Manchester in recent years, there has still been plenty of modern development, particularly along the waterfront and in the new Liverpool One shopping precinct. You are also confronted when leaving Lime Street station with some garish bright blue cladding on the St John’s Centre opposite.

Manchester to Liverpool is one of those railway journeys that could be accomplished more quickly in the Edwardian era than today, albeit with fewer stops. The fast train I caught was scheduled to take 54 minutes for the 35-mile journey, although in fact it started ten minutes late and easily made up the time without ever really seeming to put the hammer down.

I couldn’t resist a reminder of this Bangles classic from the early 80s, in fact written by Kimberley Rew of Katrina & The Waves:


Hey now, where you going with that pint of Higsons in your hand
I said: Hey now, through this green and pleasant land
I'm going down to Liverpool to do nothing
All the days of my life

Well, an afternoon spent in various pubs isn’t quite doing nothing, but probably much more fun. 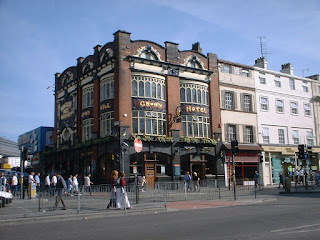 After an inexplicably crowded, standing room only train journey, we met up at the Crown, which is conveniently situated right next to Lime Street station. It was still raining at this point, but it gave up while we were in the pub and in fact the sun came out later. It’s a large street-corner pub with impressive external plasterwork advertising Walker’s Warrington Ale. The interior is even more impressive, meriting a full entry on CAMRA’s National Inventory, with stunning, intricate plasterwork ceilings and a wealth of original wooden details.

There’s a spacious main bar at the front, which given the number of blocked-up external doors has presumably been opened out at some time in the distant past, although the layout has been the same for as long as I can remember it. To the rear is a comfortable lounge with bench seating around the walls, and there is an upstairs dining room. There were eight cask beers on the bar, including Doom Bar, Landlord, Trooper and Rudgate Hop for Heroes. We sampled the latter three, which were all good, although the Trooper was certainly the best of the bunch. 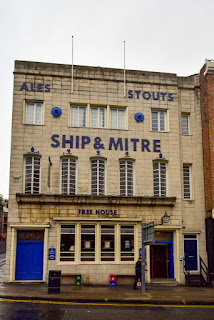 We then walked down St John’s Lane past the magnificent St George’s Hall, which is like a Merseyside version of the Parthenon. It was designed by Harvey Lonsdale Elmes when he was only 24, and he was dead by 33. Ever since I’ve been visiting Liverpool, it’s always struck me as odd that it’s so difficult to get from Lime Street to the commercial district on foot, and nothing seems to have changed, so we ended up having to walk across the throat of the original Queensway Mersey Tunnel, opened in 1933, to reach our target, the Ship & Mitre at the eastern end of Dale Street.

This is an impressive white-tiled Art Deco pub, built in 1937 as the brewery tap for the long-defunct Bent’s Brewery, that ended up falling into the hands of Bass Charrington. The suprisingly spacious, rambling interior has been mostly modernised in bare-boards alehouse style, but apparently there is an intact original function room upstairs. It positions itself as Liverpool’s premier real ale free house, and sported a very wide range of both cask and keg ales on the bar, including three form their own Flagship Brewery. We chose Flagship Lupa, Fernandes Triple O and Lees True Faith, all of which were pretty good. It also had the authentic German ABK lager which seems to be getting into a lot of beer-focused pubs. 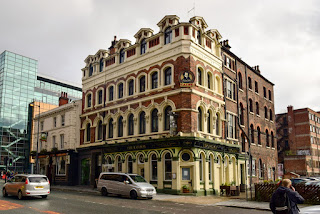 Our next call was the Railway on Tithebarn Street opposite the former Exchange Station, which isn’t on the usual real ale/heritage pubs trail, but had been recommended to me by several people on Twitter for its food. While we rarely struggle to find good beer on these trips, decent lunchtime pub food can be more of a challenge, as we found to our cost in Preston. It’s a handsome Victorian street-corner pub that has been opened up somewhat, but extends a long way back, with no shortage of comfortable bench seating, albeit sporting the dreaded scatter cushions. It was pretty busy, with most groups eating, and seemed to be popular with city workers of various ages. It also had uniformed bar staff in aprons, and gave the general impression of being a classic bustling city-centre pub.

The beer selection of Doom Bar, Dizzy Blonde and Trooper wouldn’t excite the ticker, but three beers is quite enough for a generalist pub, and we all plumped for the Dizzy, which didn’t disappoint. It was also only £2.90 a pint. While I wasn’t keeping a detailed record, beer prices in Liverpool seemed generally reasonable, and well below central Manchester, with little over £3.50. The Railway has an extensive menu of good-value food, from which we variously chose the classic local dish of Scouse and a steak baguette with chips, both of which, by the standards of mainstream pub food, were very good. 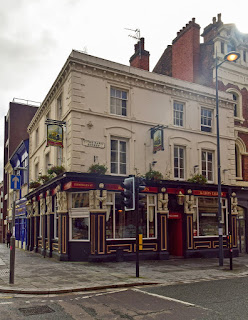 Right next door to the Railway is the Lion Tavern on the corner of Tithebarn Street and Moorfields. Outwardly, it doesn’t look as impressive, but it has a magnificent unspoilt interior which qualifies it for a full National Inventory entry. It has a corner public bar surrounded by an L-shaped corridor giving access to a News Room at the front and a cosy toplit lounge to the rear. There’s an abundance of original etched glass and a very rare Art Nouveau tiled frontage to the bar. The only jarring feature was that any fixed seating that once existed in the bar itself had been removed and replaced by posing tables.

There were six or seven cask beers available, including Lion Mild brewed specially for the pub by the local Rock the Boat Brewery. We chose Salopian Lemon Dream, which was pretty good, and Butcombe Bitter and Lees Bitter, both of which unfortunately were rather past their best, which slightly detracted from the general experience. We also took advantage of the free jukebox, featuring real CDs, which didn’t seem to include much music recorded over the past thirty years.

Thanks to Peter Allen of Pubs Then And Now for the photos, with the exception of that of the Crown, which comes from Merseyside Pub Guide.