Taverns in the town 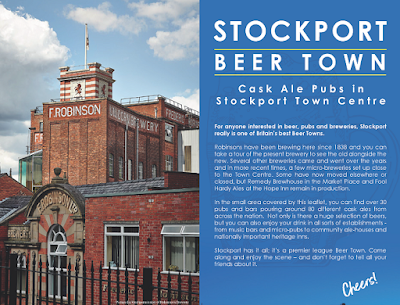 In the past many CAMRA branches produced comprehensive printed guides to real ale pubs in their local areas, and often clubbed together to cover entire counties. However, more recently these seem to have withered on the vine, caused no doubt by a combination of the general decline of print media, and the increased fluidity of the pub and beer scene in terms of both pub openings and closings, and changing beer ranges.

Something that has come along that replaces them to some extent is free leaflets listing the pubs in a particular town that is considered to be of interest to pubgoers, often produced with support from local tourist funding. I have one of St Albans from five years ago, and more recently have picked them up in Lancaster and Preston.

Now Stockport has joined the party with Stockport Beer Town, which has been part-financed by funding from the local Business Improvement District. While obviously I am somewhat biased in favour of my home town, I have to say it’s the best I’ve seen before. It lists 33 pubs within or just outside the Inner Ring Road, all pinpointed on a comprehensive map, although it doesn’t make it clear that St Petersgate crosses Little Underbank via a bridge, not a crossroads. There is a photograph for each pub.

To its credit, it lists all the current cask beer outlets, whereas some of the others have been selective to a greater or lesser degree. While it’s impossible to give details of opening hours or beer ranges, it does indicate which pubs aren’t open by 1 pm every day of the week. It also shows symbols for accommodation, real cider, dog-friendliness, live entertainment, food, outdoor drinking and wheelchair accessibility, which are unlikely to change so rapidly.

Of the 33 pubs listed, only eight first opened their doors in the current century, so there hasn’t been the rapid churn of licensed premises that some other towns have experienced, and some of those eight are as much traditional pubs as contemporary bars. There are eight Robinson’s pubs plus the Brewery Visitor Centre, but at least half as many again have closed within the area over the same period of time.

If you’re in the town, it’s well worth picking up a copy from one of the listed pubs or from the Tourist Information Centre. It can also be downloaded here.