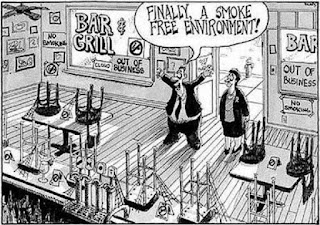 The impact of the 2007 smoking ban on the pub trade has been a perennial source of debate. Only the most blinkered denialist would claim that it didn’t have any negative effect at all, but it is hard to untangle this from the influence of the late 2000s recession and the general long-term downward trend.

However, Christopher Snowdon reports on some new research published in Health Policy which clearly shows that the catastrophic decline in pub numbers well predated the recession, and that previous recessions had made no difference to the general downward trend. 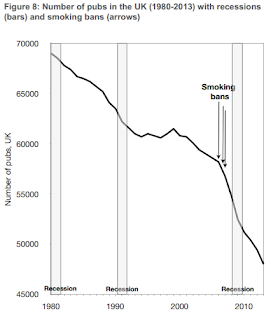 The whole thing is worth reading, but particularly interesting are the figures on household expenditure in pubs. The point is often made that smokers only made up 21% of the adult population, but in fact pre-ban they spent far more in pubs than non-smokers. They were pubs’ best customers.


The data show that before the smoking ban, smokers spent nearly twice as much money in pubs as nonsmokers - and nearly 50 per cent more on alcohol overall.

Was this made up for by nonsmokers flocking to smoke-free pubs, as anti-smoking campaigners - and the useful idiots at CAMRA - promised? Not a bit of it. Expenditure by nonsmoking households also fell, from £5.70 to £4.42 a week.

Spending on alcohol from the off-trade remained pretty similar for both groups.

It is worth noting that, even though they are treated as third-class citizens, smokers still spend nearly 30% more in pubs than non-smokers. I guess that many non-smokers just don’t like the idea of pubs, full stop. While antismokers may feel that pubs offer a more congenial environment post-ban, there is no evidence that it has led to them visiting any more often or spending any more money there.
Posted by Curmudgeon at 4:15 pm