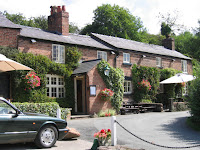 I recently came across this blog of pub reviews in Cheshire, which sadly does not appear to have been updated for over a year. The review of the Three Greyhounds at Allostock is a classic of its kind. But it struck me how “samey” so many of the pubs in Cheshire are – all those rather bland, formulaic, knocked-through, food-led establishments. Given its rich architectural heritage, there are surprisingly few pubs of real character. Yes, there are the famous ones such as the Harrington Arms at Gawsworth and the White Lion at Barthomley, but after that you start to struggle a bit. I’m sure that many other counties, even those with a strong tourist appeal, have a far more distinctive and varied pub stock.

Perhaps a lot of this is to do with the fact that historically both Robinson’s and especially Greenalls – two companies known for an enthusiastic and often insensitive attitude to pub refurbishments – had large holdings of tied houses in the county. The proximity of large centres of population gave pubowners an incentive to do up their pubs to cater for an urban-based dining trade. Many years ago I used to go from time to time to the Boot at Willington, near Kelsall, then a tiny two-roomer in the middle of a row of sandstone cottages up the cul-de-sac of Boothsdale, with a quarry-tiled floor in the tap room and serving Greenalls’ beer on gravity. Sadly now knocked through into the rest of the row and just another open-plan dining pub. So it goes, I suppose.