Wind them up and watch them go 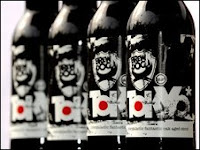 You certainly have to hand it to the owners of BrewDog for having a knack for simultaneously getting publicity for themselves and winding up the humourless killjoys of the anti-drink lobby. Their latest effort is Tokyo, an imperial stout weighing in at a mammoth 18.2% ABV, but at the same time priced at an eye-watering £9.99 for a 330ml bottle.

Rather predictably, Jack Law of Alcohol Focus Scotland (sounds like a fakecharity to me), frothed:

“This company is completely deluded if they think that an 18.2% abv beer will help solve Scotland's alcohol problems. It is utterly irresponsible to bring out a beer which is so strong at a time when Scotland is facing unprecedented levels of alcohol-related health and social harm. Just one bottle of this beer contains six units of alcohol - twice the recommended daily limit.”

Umm, Jack, how many alcohol units are in a 70cl bottle of whisky retailing for £9.99? Or, for that matter, in a 75cl bottle of 15% ABV Buckfast? And surely he should be welcoming a drink sold in the off-trade at £1.67 a unit, way above any proposed minimum alcohol price. It’s hard to see Tokyo taking the place of Tennent’s Super in the hands of Rab C. Nesbitt lookalikes stumbling around the streets of the Gorbals.

James Watt of BrewDog responded with a very good point:

“Mass-market, industrially-brewed lagers are so bland and tasteless that you are seduced into drinking a lot of them. We’ve been challenging people to drink less alcohol, and educating the palates of drinkers with progressive craft-brewed beers which have an amazing depth of flavour, body and character. The beers we make at BrewDog, including Tokyo, are providing a cure to binge beer-drinking.”

And Jack Law shouldn’t worry too much, as they’re only making a limited edition of 3,000 bottles.