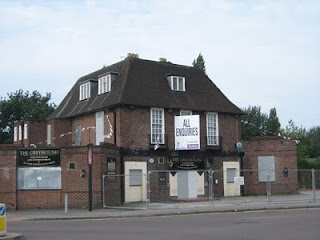 A pub not too far from me – the Greyhound in Adswood, Stockport – has joined the recent trend of closures I have illustrated on the Closed Pubs blog. Like so many others that have closed, it is a large, 20th-century pub on a free-standing site. A former Greenall’s house, it was never the best pub in the world, and there’s a Hydes pub – the Cross Keys – just down the road, but on the other hand it managed to remain viable for decades, and there’s no shortage of potential customers nearby. Many years ago, we even had a CAMRA social there.

The scale of the steel shutters and fencing suggests there’s little prospect of it reopening as a pub. Google Street View still shows it as open. It looks to be 1930s from the architecture, although it could be early 50s – the wings look more modern than the central core. In this case, the style is that associated with inter-wars post offices and telephone exchanges rather than Brewer’s Tudor or Art Deco.
Posted by Curmudgeon on September 06, 2010