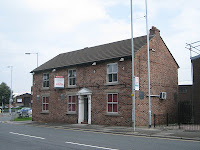 Robinson’s brewery in Stockport have recently been reviewing their tied estate and selling off a number of pubs that they don’t see as viable in the long term. To their credit, they don’t seem to have imposed restrictive covenants on these, and a number are now reopening as free houses.

The latest issue of the local CAMRA magazine Opening Times reports that the formerly run-down and seedy Railway in Romiley has reopened as “Platform 1”, saying that:

The new-look pub is far removed from its previous incarnation, comfortably furnished in a stylish ‘modern traditional’ look and with a major food operation... On the beer front it’s good news across the board. Six cask beers are sold, with house regular ‘Platform 1 Cask Ale’ alongside five guest beers – two from micro brewers and the others from regional or national concerns.

The former Flying Dutchman on Higher Hillgate in Stockport (pictured) is to reopen as “The Fairway”, while the Board in Whaley Bridge is to become “The Drum and Monkey”.

I have asked the question in the past as to what extent how well pubs are run affects the overall demand in the market – a post that surprisingly got no responses. My conclusion was “not very much” but, on the other hand, within a specific area a pub that is run significantly better and/or differently can shift a lot of trade from its competitors. It’s also the case that in places like Romiley and Whaley Bridge (although less so on Hillgate) there is something of a closed micro-market, where relatively little trade comes in from outside, and many local pubgoers are in effect only going to choose between the six or eight pubs in their own village-cum-town.

I wish all of these new ventures well, but only time will tell whether they can attract new customers and achieve a level of success that they didn’t enjoy under Robinson’s ownership, or whether their previous failure was basically due to a combination of location and customer base that no new formula can do much to change.

It’s notoriously difficult to put your finger on what makes a pub work in terms of the combination of location, offer and value for money. If it was simply a case of tarting the place up a bit, putting a few different cask beers on the bar and watching the customers flood in, everybody would be doing it, but clearly they’re not. For example, nobody has yet bitten at the Grapes in Edgeley despite it being in a very densely-populated area.